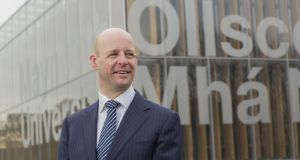 Traditional third-level courses should be radically overhauled to allow students choose whether to specialise early or pursue a much broader range of study, according a university president.

Philip Nolan, president of Maynooth University, said a majority of its students are opting to study a wide range of subjects under recent changes to its undergraduate programmes.

He said this illustrates a major appetite among students for a more flexible approach to learning across the wider higher education sector, rather than a more rigid curriculum.

A majority of new undergraduate students (59 per cent) opted to pursue a wider range of study, while the remaining 41 per cent chose to specialise in one particular field.

He has previously criticised some colleges for allegedly manipulating the CAO system by offering narrower course options with few student places in order to drive up points requirements.

However, he said overall experience of universities who are instituting similar reforms has been positive.

Maynooth University and University College Dublin have led the process of providing broader entry routes to college and have benefitted from increased application numbers as result.

Plans to create broader courses came about following a report from an Irish Universities’ Association task force in 2012, which called for greater transparency in admissions strategies as well as a reduction in course codes to try to relax the points race.

Some universities have moved slowly to introduce these changes, while there has been an increase in courses offerings among institutes of technology.

Many institutes of technology argue, however, that moves to create additional courses are not driving up points but providing greater options for students.

Prof Nolan said: “All students are on a learning journey. Some of them are extremely clear about their ultimate destination while others are taking time to evaluate their options.

“We think it is important that both these groups are catered for, and the relatively even split we have seen in the first year of our new curriculum demonstrates that we were correct in our evaluation of students’ needs.”

As part of the changes at Maynooth, first-year undergraduate student have had the option of taking a “critical skills” course.

More than a third of all first year students are now taking this module, he said.

“This module gives students the opportunity to work with their peers from different fields to address complex problems from a number of distinct perspectives,” Prof Nolan said.

“One of the guiding principles of the new curriculum is that we must ensure our students graduate with the skills and qualities they need to thrive in a world where change is a given and adaptability is essential.

“Industry will always look for flexible people and critical thinkers who can respond to an ever-changing workplace.”