These schoolchildren have written their first book

Bookmarks is a project that aims to inspire children to become the next generation of writers, illustrators and publishers 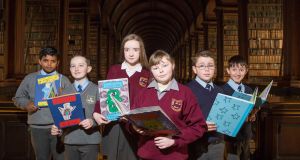 From left, at the launch of the Bookmarks exhibition in Trinity’s Long Room were Erik Paul and Clayton Fagan of Drimnagh Castle; Sarah-Ann Mitchell and Caithlain Hanlon of Scoil Cholmcille, Ballybrack; Ryan Loehmann and Finn Wallace of Scoil Eoin, Kilbarrack. Photograph: Paul Sharp/SharpPix 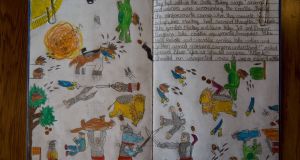 One student’s work in the exhibition. Photograph: Paul Sharp/SharpPix

Finn Wallace has just done what many people talk about but never get around to doing: he has finished writing his first book.

The Adventures of Jack and Bob is a fast-paced read that follows two young boys as they zip through portals and do battle with otherworldly creatures.

The book, which took him just six weeks to complete, has just gone on on display in Trinity College Dublin’s Long Hall, which also houses the Book of Kells.

“The idea for the story just came into my head because I have a good imagination,” he says. I thought it would be fun to do my story about a pair of twins who go through a portal and meet a goblin.”

For accomplished authors, the prospect of writing and illustrating a book in two months might seem daunting. But Finn and a group of primary schools pupils have done just that.

An exhibition of handmade books designed and illustrated by Dublin children and inspired by works from Trinity College Dublin’s library has gone on display at the university. The exhibition marked the culmination of a two-month project called Bookmarks, which aims to inspire children to become the next generation of writers, illustrators and publishers.

Not only does it fire children’s imaginations, it is also helping to lift their horizons by introducing them to the world of higher education. Many of those participating are from schools where only a minority of school-leavers go to third level.

This year’s programme involved fifth-class children from Drimnagh Castle; Scoil Cholmcille; Ballybrack; and Scoil Eoin, Kilbarrack. The schools are all linked to Trinity through its access programme, which supports students from under- represented backgrounds.

For many of the children, the Bookmarks programme occurs at a time when they are preparing for a major change in their lives, as they move from primary to secondary school.

Over the course of the initiative, children attended a series of workshops delivered in their schools by poet and children’s author Catherine Ann Cullen, artist Hannah Maguire and editor and “book doctor” Síne Quinn. Each child writes, illustrates and binds their own book, with assistance from the experts.

This year’s book titles – focusing on the theme “Between Two Worlds” – give a flavour of some of the zany creativity involved. They include Chillin’ with a Villain, Magical Mango and The Poison Ivy, The Cloudians, Bing Bong Saves the School.

Workshops delivered by research students from the university's school of English help the children to develop their storylines. There is also a chance to appreciate vintage books in Trinity’s special collections.

As part of this year’s programme, the children were introduced to the Pollard Collection, which consists of more than 10,000 historic children’s books bequeathed to Trinity by the librarian Mary “Paul” Pollard.

They included classics such as Gulliver’s Travels and Robinson Crusoe as well as lesser-known books by neglected Irish authors including The Adventures of the Three Bold Babes by S Rosamond Praeger.

A chance to shine

Catherine Ann Cullen, who began volunteering with Bookmarks in 2012 while studying at Trinity, says she sees first-hand how children grow and flourish over the course of just six weeks.

“It is a fantastic achievement for them, and many of them have to cope with other challenges in life because they come from under-resourced communities,” she says.

The first session, Cullen says, involves talking with the children about the structures of stories and giving them a big sheet of paper where they draw a “mind map” of the story.

“We find a tight structure is essential to the project. Without it, I don’t think we would get every single child producing a completed book in six weeks,” she says. “For all the other sessions, we start by having a look at where the children are in their books.”

There is usually a lot of variation in children’s efforts, she adds. Some write reams and leave the pictures. Others draw a lot and write very little. Quite a few fill their books with writing and illustrations.

“Some don’t seem to have done anything at all, though it turns out they have been drafting like mad,” says Cullen.

“We break down the book into different sections and each session in the classroom concentrates on one of these: the portal into the other world, the climax of the story, the returning home, etc. We brainstorm good vocabulary to go with the section and Hannah draws sample scenes.”

The biggest excitement of the process for the children is seeing their finished work on display in the Long Room.

“It’s one of the most beautiful rooms in the world. I always tell them it is like a cathedral for book-lovers,” Cullen says.

“For myself, I love meeting the children every year and enjoy all the different personalities, their sense of fun and their trust in us. I see many of them reach ‘the wall’ just like marathon runners – the point where they think they can’t go on – and I see them get through. Their joy and pride in their work is very emotional for the Bookmarks leaders.”

Their sense of achievement is almost overwhelming, she adds. They have done what many people will never do, and what even authors find a challenge: writing and illustrating a book.

“The children love telling us, ‘My mam/dad/granny/uncle etc doesn’t really believe I’ve written a book. I can’t wait to show it to them on the night,’’ she says.

As for 11-year-old Finn, he is relishing being an author. His favourite part of the programme was doing the illustrations and then getting to show off the finished product to his family when it went on display.

Cullen says instilling self-belief in the children is key to the programme’s success in raising third-level participation rates.

“This first glimpse of third-level life is inspirational for many of them, and we know for a fact that children who have experienced Bookmarks have gone on to access third-level education, and are often the first in their families to do so.

“It is very important for us on the Trinity Access Programme that we emphasise that college is a real option for these children. They are just as entitled as anyone else to a full education, and at all levels of their school lives we will try to make that option easier for them,’’she says.

Aoife Dunne’s mother, Denise, says her daughter felt a huge sense of achievement after creating her own book. “It was lovely to see her confidence growing every week as the book began to come together and we were so proud going to see it on display in Trinity,” she says.

Aoife, a self-confessed “girly girl”, wrote her book, The World of Dance, based on her love of dance. The character in her book becomes a “dance sensation”.

Aoife says her favourite part of Trinity is the Long Room, which featured in the Harry Potter films, and says she would love to go to college there when she is older.

Aoife’s advice to the next intake of Bookmarks students is not to be scared of Trinity: “Don’t stress. Be proud. It’s really cool to be involved,” she says.