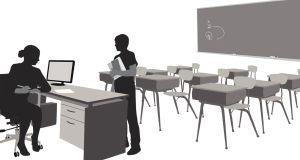 The bigger picture remains the fight against Covid-19 and keeping youngsters healthy to face whatever it is their future holds. Photograph: iStock

“Is your glass half empty or half full?” asked the mole. “I think I’m grateful to have a glass,” said the boy.

If the mole – from Charlie Mackesy’s The Boy, the Mole, the Fox and the Horse – had travelled the length and breadth of Ireland with that question after the cancellation of Leaving Certificate oral and practical exams he’d have encountered a wide variety of reactions.

Its impact is enormous, make no mistake about that, and the verbal fallout since then represents only a fraction of what’s to come (presumably later this year) when the Leaving Certificate results become available and the full consequences in terms of the CAO points race become clear.

The announcement last month had to deliver what exam candidates needed most: clarity. Like it or not, Minister for Education Joe McHugh delivered it. We can only admire him and his team for the courage shown in taking this difficult decision.

As the Covid-19 pandemic generates fear and uncertainty, we can only say, or sing, go raibh míle maith agat, merci beaucoup, danke, gracias, grazie, etc, to the Minister, and indeed many others, for the way they are handling the ongoing crisis.

That said, his solution has also presented enough disgruntlement for his office to know that it won’t be acceptable ever again. It simply isn’t fair and so, when the current situation has passed, a plan must be put in place so that we all know, with the same certainty, what would happen should something similar happen in the future.

In my school, students who have differed vastly over the past 5½ years are suddenly now equal. Except they aren’t even all equal. Students exempt from languages and who have not chosen a subject with a practical component envy those who enter the points race with some points “in the bag”. Those studying languages but without a subject due to have been examined in part via a practical element envy those they perceive as having an additional advantage. If normality resumes while there is still time, could anything more be done to address those very real imbalances?

Many universities on the continent allow large numbers to enter the first year of university courses and whittle those numbers down on merit for entry into second year. Could we, exceptionally (or perhaps experimentally), try that for the coming academic year?

Widening the parameters for who gets accepted, and letting people fight the real race once actually on the course, would at least take the anxiety out of the situation for those feeling disadvantaged. It would surely relieve some of the pressure to teach and learn “normally” for the Leaving Certificate in anything but normal circumstances.

But increasing the intake may simply not be an option, and so we should look only at measures which allow us to maintain roughly the usual number of first-year places. Could we, therefore, ensure relative stability in the points required and add in the element of an entrance exam in order to decide the final allocation of college places?

I can already hear the protests, but we are where we are, and we can either leave things as they are or try to modify them further down the line.

And even beyond that. We need to put in place reasonable measures for any future scenario leading to enforced cancellation of part of a State exam. The challenge here is always how much to count retrospectively. Many would argue that the greatest injustice in this year’s approach is that it penalises all those who have worked or invested (financially too, perhaps) in the hope of securing a top grade.

That there is no risk now of achieving anything lower than 100 per cent for a portion of the exam is sullied by the fact that it is the same for every other candidate, however little time, effort and investment was put in over the past five or more years.

Wouldn’t it then make more sense for the past to count? Yes definitely, but only if people already know this. Changing the goalposts retrospectively is always unfair. Differently unfair, and dissatisfying to a different part of the cohort, but also undeniably unfair. Interestingly, the UK has announced that it is scrapping all GCSE and A-level exams, using mock results and teachers’ estimates of what they predict students would have achieved. Some schools were apparently investigating the possibility of using the (controversial) international version of GCSEs and A-levels, making it abundantly clear that for them a final assessment opportunity in the bush was more appealing than the teacher assessment in the hand.

But the company responsible for those exams has said that for safety reasons they cannot be held in countries where the schools are closed. So in the UK, and doubtless elsewhere as well, they too face a challenge and the likelihood of some degree of unfairness, however they proceed.

The bigger picture remains the fight against Covid-19 and keeping youngsters healthy to face whatever it is their future holds. It is only by achieving that that we can claim to have a glass at all.