Tens of thousands protest in Dublin over ‘crisis’ in childcare sector 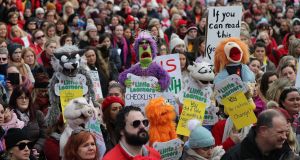 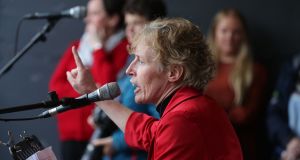 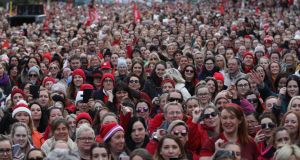 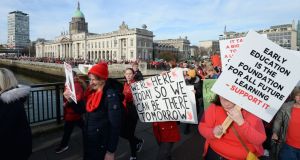 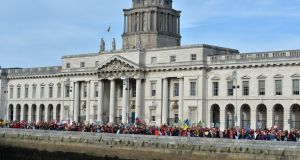 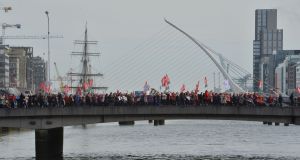 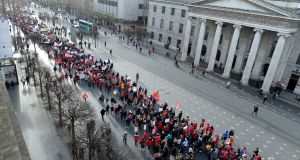 Tens of thousands of childcare workers and parents marched through Dublin’s city centre on Wednesday as part of a “day of protest” over pay and conditions in the sector.

The Together for Early Years Alliance says underfunding of the sector has reached crisis point and is resulting in poorly-paid staff and unsustainable services.

It has called on the next government to increase funding in order to reduce fees for parents, increase pay for educators and support the sustainability of services or face the prospect of further demonstrations.

Organisers estimated that close to half of the country’s 4,200 childcare facilities closed on Wednesday to facilitate staff to take part in the protests.

While the action caused disruption for working parents, many mothers and fathers opted to march in solidarity with childcare workers.

Brian Farrelly and his son Oisín (4), who attends Rainbow day care centre on Dublin’s Manor Street, marched with a homemade placard of a rainbow which read: “We support our childcare workers.”

“I totally support them. These guys are paid a pittance and provide so much value to my children. I can’t help but thank them enough. There are only so many boxes of chocolates you can buy them on occasions. They need to be properly supported for their work,” he said.

Liz Campbell, owner of Mini-Me Childcare, said her small facility in Co Kilkenny faces closure in March due to “underfunding and over-regulation”.

“Since they brought in the government [subsidies] scheme, I’ve been undercut by €18,000 per year. I’ve 15 children in total. I’m losing €45 per week for each child in the ECCE [early childhood care and education] scheme. My staff are on the minimum wage.

Isha Kidd, a childcare worker at John Johnston Montessori in Castleknock, said that while her employer was “very, very good”, the wider sector is in crisis.

“I’m paid €12 per hour for 38 weeks a year. I can’t get a mortgage. I have a level eight [degree] course. I’m still where I was seven years ago – and still paying education loans back.”

The protest was organised by Together for Early Years, a coalition of groups including Sitpu, Federation of Early Childhood Providers, Association of Childhood Professionals, Seas Suas and National Community Childcare Forum.

Among the group’s demands are the introduction of a living wage for early years educators, an improved funding model and less red tape.

Elaine Dunne, of the Federation of Childhood Providers, said she expected the protest would be the “first of many” unless the next government tackles funding issues.

“We’re being forced to fight back. We’re doing this for parents, children and the providers. We need proper levels of EU funding.”

Siptu’s Darragh O’Connor said the situation was at crisis point and it will seek to put pressure on the next government to address issues such as low earnings and high childcare fees.