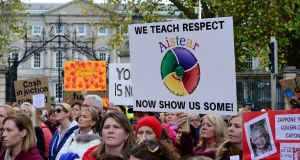 Protest organisers expect up to 10,000 workers, parents and providers to take part in a march that is due to leave Parnell Square, Dublin, at 12.15pm, and finish at Government Buildings. File photograph: Cyril Byrne

Hundreds of childcare facilities are set to shut on Wednesday as thousands of staff and parents take part in a “day of protest” over pay and conditions in the sector.

Protest organisers expect up to 10,000 workers, parents and providers to take part in a march that is due to leave Parnell Square at 12.15pm and finish at Government Buildings.

The Together for Early Years Alliance says underfunding of the sector has reached crisis point, and is resulting in poorly-paid staff and unsustainable services.

Elaine Dunne, of the Federation of Childhood Providers, said she expected the protest would be the “first of many” unless the next government tackles funding issues.

“We’re being forced to fight back. We’re doing this for parents, children and the providers. We need proper levels of EU funding…Personally I want to see another protest on March 5th, but we’re due to decide that later this week.”

The action is set to cause widespread disruption for working parents, but the organisers say many mothers and fathers support their actions and want to attend the demonstration.

“The response from parents has been tremendous,” said Darragh O’Connor of Siptu. “They know the childcare system isn’t working for them either; they are paying some of the highest fees in Europe. They want change as much as workers on the minimum wage.”

Sessional services and part-time services – such as those providing the “free” pre-school year – are among the most likely to close as a result of the protest. Most larger childcare chains providing full-time care are due to remain open.

Services that close for the day will not receive State funding, but Minister for Children Katherine Zappone has said these can make up the day on another date and get paid.

In practice, some childcare services – with the co-operation of parents – are technically remaining open, but will close when no children turn up in the morning. This, they say, will allow services to be paid for the day.

While many larger childcare chains have requested that staff not take part in protests, many workers are choosing to take part anyway. The protest is being timed to coincide with the closing phase of the general election.

Ms Zappone’s has said she shares concerns about the need for greater investment in the sector.

Her spokesman said investment in the childcare sector had increased 140 per cent in the last five budgets, and that this had increased capacity in the sector and doubled the number of children who benefit from childcare subsidies.