Telling stories with numbers – a flexible route to an accounting career 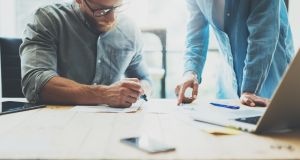 ’A new flexible route into chartered accounting is opening doors to many students who may have felt that this was not an option for them.’ Photograph: iStockphoto/Getty Images 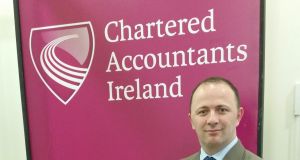 Becoming a chartered accountant has long since involved a familiar route: graduate from college and enter a training programme with one of the big audit firms. It’s a route full of opportunities and rewards, not least the chance to earn money while you learn.

But it’s not for everyone. Until 2009, professionals looking to change career direction and move into chartered accountancy had to step back into a junior role for at least three years of training. Now, a new flexible route into chartered accounting is opening doors to many students who may have felt that this was not an option for them.

Ronan O’Loughlin, director of education and training with Chartered Accountants Ireland, says the flexible course is the biggest innovation in accountancy education for generations. “The qualification is open to all graduates – not just those from accounting and finance – and to those that have passed both years of Accounting Technicians Ireland exams,” he explains. “In practice, it appeals to young professionals who are in the world of work, especially those in financial services, banking, funds and the accountancy sector.”

O’Loughlin recognises that the traditional route doesn’t work for everyone, which is why flexible learning is a game-changer. “The traditional route was the system that most people went through until almost 10 years ago. It involved an agreement between the graduate trainee and the firm that they would study chartered accountancy and they would stay with the firm for some time. In return, they had their education paid for, study leave, an experienced mentor, a job and a salary that rose incrementally. Going down the flexible route, students are still looking at a professional qualification in accounting but they like the fact that they can study towards Ireland’s leading professional accounting qualification without having to enter the traditional training contract with an accountancy practice.”

And it seems there’s never been a better time to get into the profession. “We hear a lot about opportunities in science, engineering, technology and maths, but there’s also a real need for more qualified accountants, and companies are scrambling to recruit the best talent,” says O’Loughlin. “Indeed, we believe that this sector is the biggest employer of graduates in the country. I was recently speaking to one Irish firm who said they could easily take on eight graduates every year but they have struggled to recruit that many. At the same time, the four biggest audit firms – PwC, EY, Deloitte and KPMG – are expanding and will be offering more training contracts this year, while other major players, including Grant Thornton and KPMG, are also growing. So we see huge opportunities in financial services.”

Chartered accountants are also in high demand outside Ireland, and this qualification allows them to work in the UK, New Zealand, Australia, South Africa, Hong Kong, the United States, Canada and the EU. It’s also an industry with a roughly 50/50 gender balance and one which has been vocal in support of workplace diversity.

So, what exactly does this flexible route involve? O’Loughlin explains: “Students can avail of more flexibility, such as choosing to sit just two subjects at a time, or choosing to study first and then getting their practical accounting experience later. There are also new distance learning options with online learning support. It is generally delivered over three years, but can be done in less time if people have certain exemptions based on their previous qualifications. The maximum amount of time somebody can take is eight years, although we wouldn’t encourage this.”

O’Loughlin says that qualifying through Accountants Ireland is not just about passing exams; it’s also about getting appropriate and relevant experience. “We give credit for previous experience and we insist that students on the course have completed a least a year in an accounting or finance role either before the start studying or before they sit the final exam. This is because if you do not have any practical work experience by the end of year three, you are at disadvantage. In practice, this means that people will often talk to their employer about studying for this qualification for a year and then looking to move to a different area of the company.”

Pass rates are over 80 per cent for the final year. Once qualified, Chartered Accountants Ireland – one of the largest professional bodies in Ireland, with over 25,000 members and nearly 7,000 students – offers a suite of supports to its graduates including mentoring and career coaching. There are also a number of options in further education, including a certificate in cyber-security and a diploma in accounting standards.

“Accounting is about telling a story with numbers, so it’s equally important that we are good communicators,” says O’Loughlin. “This is a key part of the training and one that sets up our graduates for many opportunities.”

– Fees are €2,100 for the first year, while those on the flexible route can split the fee into three payment schedules. For more information, see CharteredAccountants.ie/study

“I studied commerce in UCC and finished in 1999. I decided to do a master’s in ecommerce at the perfectly wrong time, with the dotcom bubble bursting just as I graduated. I moved to Dublin and began working in banking, specialising in risk. I was with Bank of Ireland for many years and joined Ulster Bank in 2010.

“I was interested in the chartered accountancy qualification for a number of years. I had seen friends do well from it, as well as my brother who is now a partner in a firm with offices around Ireland. I knew, however, that it would not be a short-term commitment so I discussed it carefully with my wife.

“I’d worked for over 10 years, so there was no way I could step back in my career and enter into a training contract. The flexible route offered a chance to balance study, work and family commitments. The biggest difference – and one I knew of from the outset – is that students going down the traditional training path have a good amount of study leave at the end of the process, whereas I knew I would have to stay on top of the workload from the outset.

“The course involved online classes and then occasional classes in Dublin city. I made sure to attend all of them and to ask questions so that I could keep up to speed. I learned about business law, business leadership, the technical requirements of accounting, tax and more. It is a wide-ranging course that requires you to have both depth and breadth to your knowledge.

“Because I had graduated more than 10 years previously, I wasn’t eligible for exemptions, but that made sense because the material wasn’t exactly fresh in my mind. I started in October 2012 and I had finished by mid-2015, the same year we had our third child.

“It was a fair but not unmanageable time commitment. I spent about three or four hours per week on study, attending lectures every second or third weekend, as well as the odd weekday lecture every month or two. It just required me to be organised and, indeed, that was half the battle.

“Now I am working in Ulster Bank on a new accounting standard called IFRS9 and I don’t think I would have got there without this qualification. I’m very glad that I did it.”