Diversity gap: ‘There are no Muslim, Asian or Indian teachers’

Our classrooms are diverse but teachers are generally white, Irish, middle-class women 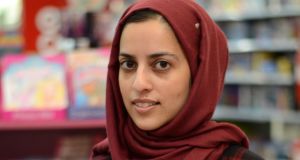 Secondary school teacher Anissa Majeed: she stresses the need for role models in a country where at least 50,000 children – or one in ten – at primary level are non-Irish, while more than 30,000 have either no religion or a faith other than Catholic

On her first day of teacher training, Ryma Halfaoui noticed some students who realised they were in the wrong class as soon as the lecturer started speaking Irish.

Some of the students got up to leave. The lecturer looked at Halfaoui, giving her the opportunity to follow suit, in the expectation she didn’t speak Irish either. She was, however, in the right class.

“It was just that they were underexposed,” says Halfaoui, explaining that staff probably hadn’t come across many Muslims pursuing a Bachelor of Education.

The 19-year-old from Coolock, whose parents are originally from Algeria, applied to the secular route in St Patrick’s College, Drumcondra, when it amalgamated with Dublin City University (DCU) and is studying to be a primary school teacher.

“Sometimes it comes from the students themselves,” she says. “A lot of them wouldn’t expect you to speak Irish, they’d expect you to be exempt from it as well. Even though it’s mandatory for primary school teaching . . . It’s not racism, but a lot of ignorance and underexposure.”

Out of a total of 460 students, Halfaoui is the only Muslim in her class and, according to a college pastor, the first they’ve had on campus.

But what took Halfaoui by surprise on her first day was the overall absence of different ethnicities.

“It wasn’t like there were no Muslims or no hijabis. There were no Asians or brown people or Indians,” she says.

At a time when the classroom is growing more diverse – with more enthnicies and nationalities than ever before – the teaching profession remains overwhelmingly white, female and middle-class.

Researchers at NUI Galway who carried out The Diversity in Initial Teacher Education in Ireland research project noted that up to 98 per cent of trainee teachers claim Irish nationality, and more than 95 per cent are “white Irish”.

Conversely, the latest official figures on the Department of Education’s primary online database indicate at least 50,000 children – or one in ten – at primary level are non-Irish, while more than 30,000 have either no religion or a faith other than Catholic.

The teaching profession, it is clear, is failing to reflect modern society. If anything, these figures may well underestimate the multi-ethnic make-up of our schools.

A spokesman for the Department of Education says that, under data protection rules, ethnic/cultural background and religion questions are optional.

“The level of non-response or ‘no consent’ response is close to 30 per cent so caution is required when interpreting the data,” he says.

Research conducted by The Irish Times in recent years, however, confirms that diversity is growing in the classroom, with children from immigrant backgrounds concentrated in a relatively small number of schools.

In at least 20 schools , for example, more than two-thirds of pupils were from a non-Irish background.

This is despite efforts to attract under-represented groups to the profession, on the basis that students from minority backgrounds do better when they have role models in the classroom.

Earlier this year, Minister for Education Richard Bruton announced the allocation of €2.4 million in funding to promote diversity in the teaching profession.

However, the efforts are focused on “people, in particular, from socioeconomically disadvantaged backgrounds, students with a disability, and members of the Traveller community”. Other ethnic or religious minorities, it appears, are not being targeted.

Raihana Zeroug, a sixth-year student from south Dublin who wants to become a primary school teacher, says having teachers who reflect the diversity of the classroom is hugely important for pupils.

“They’ll think ‘if my teacher’s more diverse, then so are we,’” says Zeroug, who is Muslim.

“It will open their minds to other nationalities and cultures and will make them feel like everyone else. If my teacher is like that, then it’s normal,” she adds.

Anissa Majeed, a Muslim from the UK who trained to work as a teacher in Ireland, agrees.

She graduated with a joint degree in English and history from University College Dublin in 2009 and went on to qualify as a secondary school teacher. She did a year of teacher training in Loreto High School Beaufort in Rathfarnham, Dublin.

“I was probably one of the first Muslim women they’d [the pupils] ever spoken to in their life, and maybe ever will, for some of them,” she says.

“It always takes more effort to change an adult opinion whereas kids, they might be a little bit apprehensive of you at first but once they get to know you, they’re like ‘oh she’s just normal’ and that’s it.”

Majeed says role models provide “a story of success” for students to look up to, which can make them feel they too are capable of achieving something.

It’s important for students to have role models “from every race, religion, socioeconomic background and education level so they can have someone similar to relate to” she adds. “They need to see that people similar to them are successful and have not just been written off.”

Halfaoui’s first year of college was not without its struggles. “It was hard to make friends. And in huge lecture halls, when I sat down, no one would sit next to me, so I was very upset,” she says. “First semester, I was ready to drop out. But after placement and everything, you kind of realise why you’re there.”

She had a two-week placement in her former primary school St John of God in Artane, Dublin, a girls’ national school with a Catholic ethos.

“When I was on placement, my students never had a Muslim teacher before, so they were really amazed by it. It was great seeing the kids’ development towards me,” she says.

“One of the girls put her hand up, and it was completely innocent, and said: ‘Miss, are you always cold?’ And I said: ‘what’s that?’ And then she was like: ‘I mean you’re always wearing a scarf.’

“But I was [cold], and I was always wearing a winter scarf so I was like: ‘yeah, yeah’ and she said: ‘not that scarf, the other scarf’ . . . I was about to answer, but the girl beside her said: ‘Oh it’s not a scarf to keep her warm, some people are just more religious than others’ and that was it. They just went back to colouring. They were about five or six.”

Overall, Halfaoui says the students didn’t ask a lot of questions. “They were kind of unfazed.” None of the parents had a problem either, she says.

When she was making preparations ahead of the Gaeltacht visit, she wanted to inquire about the availability of halal food, which was practically unheard of among the staff.

“Well, they’re going to have to learn how to make it now,” a college pastor, who hopes to accommodate Muslim students, cheerfully told her .

Halfaoui, who is now going into second year, has been to Galway for the Gaeltacht during her first year, where she again noticed the “underexposure”.

But that was understandable, she believes. “I doubt hijabis ever walked into a shop in Connemara and started speaking Irish.”