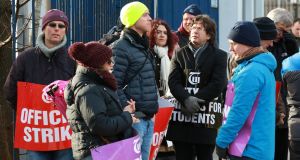 Teachers and lecturers have voted to back industrial action in opposition to the current two-tier pay structure in schools. Picture Nick Bradshaw

Teachers and lecturers have voted decisively to reject the new public service agreement and to back industrial action in opposition to the current two-tier pay structure in schools.

Members of the Teachers Union of Ireland (TUI) opposed the new public service agreement by 87 per cent to 13 per cent.

In a separate ballot, they voted for industrial action including potential strikes by 81 per cent to 19 per cent in a campign to end the current system whereby staff recruited since 2011 receive lower pay than those in place before then. The turnout for the ballots was 52 per cent.

The TUI executive had argued that proposed pay deal “would effectively copper-fasten a system of pay inequality for its three- year duration”.

TUI president Joanne Irwin said it was “morally wrong that two colleagues are placed on significantly different pay scales although carrying out the same work”.

“This constitutes unacceptable discrimination against those employed after 1st January 2011.”

However, Minister for Education Richard Bruton said on Thursday that the introduction of pay parity for teachers could only come about at the expense of resources for schools.

Speaking at Fine Gael’s pre-Dail gathering, he declined to commit to equal pay for equal work.

Mr Bruton insisted he fully understood the request from younger teachers to be on the same pay scale but the Minister said he had to balance the needs of students with the requests of teachers.

“We are not in a position to go the rest of the way at this time,” Mr Bruton said.

“We have negotiated a package with all the trade unions, which hopefully will be accepted where €900 million has been allocated and that has been allocated in as fair a way as possible in negotiations with the unions. I do not have another €250 million in my vote to achieve something different.

“The only way that could be done is denying children resources in their school.”

Ms Irwin said the TUI executive would decide in due course on usage of the mandate for industrial action which it had recevied from members.

The Public Service Executive Union (PSEU) said its members voted in favour of the new accord by by a margin of 85 per cent to 15 per cent.

PSEU general secretary Tom Geraghty said the result reflected recognition on the part of his union’s members that the pace of pay restoration had quickened. However, he said there were a number of other issues that needed to be addressed including the question of pay for those recruited since 2011. He said this need to be resolved in the interest of equity.

Separately on Thursday, the Garda Representative Association (GRA) representing rank-and-file gardaí said it would urge its 10,400 members to accept the proposed new agreement in a forthcoming ballot.

Under the terms of the proposed agreement, about 250,000 State employees will receive pay improvements of between 6.2 per cent and 7.4 per cent over three years.

A further 50,000 civil and public service staff recruited since 2013 and who have a less generous pension scheme will receive pay improvements of 7 per cent and 10 per cent over the same period.

About 23,000 State employees such as gardaí, military personnel and prison officers, who have faster-accruing pensions than other groups, will benefit least from the proposed new agreement.