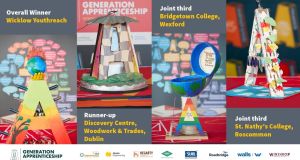 Wicklow Youthreach has been named winner of the second level Generation Apprenticeship competition.

Teenagers who turned material destined for landfill into a prize-winning display to highlight the dangers of climate change have won a national apprenticeship competition.

Students at Wicklow Youthreach were named winner of the second level Generation Apprenticeship competition with a prize of €1,500.

“We hope this motivates people to think of how they can do the same,” he said.

“We are delighted to take first prize and believe it can lead to longer term and positive changes as we emerge from Covid-19 and into a new phase of recovery and growth for our economy and society.”

Stephen Dempsey, speaking on behalf of the Discovery Centre, said the team wanted to capture the skill areas of woodwork, tiling, painting and decorating, and to emphasise how much material generated through these trades could be recycled and used again.

Bridgetown College’s team of Caitlin Lambert Dunne and Therese Keating asked people to “be a part of the solution not part of the pollution” and examined the link between waste going into oceans and the impact on animals’ natural habitats.

In support of their “jobs need to be environmentally friendly” message they recommended that construction companies use renewable sources of electricity, plant trees near building sites and develop an energy efficiency in buildings workforce.

“We are over the moon with third place in such a prestigious competition,” they said.

They added that they were able to draw on a mix of technical, creative, ICT, art and design skills.

Organised by Solas, the competition asked entrants to build an “A” letter – based on the Generation Apprenticeship brand – from materials supplied that were previously destined for landfill.

A total of 156 teams across the State entered the competition, which was supported by the Teachers’ Union of Ireland and sponsored by Suir Engineering.

Andrew Brownlee, chief executive of Solas, said the competition has provided students with the opportunity of engaging with top Irish construction companies has generated a unique set of insights around what they want from their future employers.

“It provided a unique platform for students to show employers that their understanding of a good job is measured by how good or bad it is for the planet,” he said.

“It is a powerful message which, if embraced, can help industry to develop more sustainably in the future.”

Paul Cremmins, director of Suir Engineering, said the talent on show in the competition was “amazing” and was a positive sign of the pipeline of apprentices coming through.

When assessing the work, judges from a range of construction and engineering firms considered the design of each entry together with how well they elevated the idea of apprenticeship and their potential to positively influence business and society on tackling climate change and sustainability.