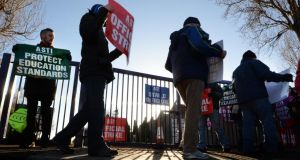 Secondary school teachers are to hold a second day of strike action over the reform of the junior cycle on Thursday, January 22nd.

More than 730 secondary schools are to close for the day, affecting more than 333,000 students and disrupting plans for their parents and guardians.

While the unions continue to resist plans for school-based assessment, they said they were prepared to meet intermediary Dr Pauric Travers after Minister for Education Jan O’Sullivan proposed this week that he chair further talks.

The ASTI and TUI, which together represent 27,000 secondary teachers, said they had a strong mandate for further industrial action after the first walk-out on December 2nd.

They claimed parents in local communities were broadly supportive of their stance but this was contested by the National Parents Council Post-Primary - the umbrella group for parents’ associations - which has backed Ms O’Sullivan’s reforms.

Responding to the announcement, the Minister said another day of strike action was “unwarranted and unreasonable, and will cause unnecessary disruption to students and their families”.

She said her officials would be engaging seriously with Dr Travers in the coming days and she hoped to see the same level of engagement from the union side.

“Earlier today, representatives of students, parents, school leaders and all management bodies were briefed on the current position in relation to junior cycle reform, and unanimously reiterated their support for the compromise proposals which have been tabled by Minister O’Sullivan,” the department added.

However, the unions said “Teachers believe that they are acting in the best interests of the education system and the quality of service to students. In addition, it was clear to teachers on picket lines on December 2nd that they had the support of parents in their communities.”

In a statement, the unions added: “Teachers regret any inconvenience caused to parents and students by the industrial action, but their willingness to take further strike action is a clear indication of the level of their opposition to significant elements of the proposals.”

ASTI President Philip Irwin said: “It is unfair to claim that teachers have not moved. Teachers support many improvements including increased use of project and portfolio work and a move away from an excessive reliance on a terminal examination. However, they want these externally assessed.”

The decision to announce a second strike date was made today at meetings of the ASTI standing committee and TUI executive committee.