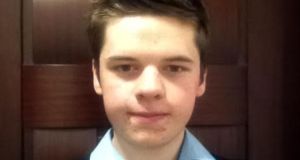 “My favourite subject is history. I have loved history in general ever since I watched Reeling In The Years [on RTÉ TV] as a young boy. There is a substantial amount of political study in Leaving Certificate history and that also interests me. I can learn a great deal not only about 20th-century Irish history but also about 20th-century world history, including dictatorships in Europe, the second World War and modern US history,” says Cathal.

Cathal says while he enjoys languages such as French and German, Irish is not his favourite subject.

“The fact that I have to undertake so much rote learning for the exam is my issue. To pinpoint a particular area, I find it quite nonsensical to have to learn 20 sraith pictures when I will only be asked one in my oral exam. It’s a tortuous task which requires regular practice,” he says.

Cathal says he was initially interested in studying law because of his love of politics history and English.

He says he didn’t go to any open days but has always had it in his head that he would study in Dublin or Maynooth.

“I regret to say I have not been to any! This may sound ignorant but my preference would be to study in either Dublin or Maynooth. Hopefully, I would be in the company of some familiar faces from Cavan and that I wouldn’t be or feel too far away from home.”

“My original first CAO choice was primary teaching and psychology in Mary Immaculate College Limerick. However, I have since removed it from my choices. Although being an excellent course, one of its entry requirements is that the applicant gets a very high number of points in the Leaving Certificate, at least 550 points were needed last year. There is also a highly demanding level of work involved in it and I would possibly not be able to come home at weekends due to the extremely long journey.”

“I would prefer to study as close to home as possible so DCU, Marino, TCD, UCD and Maynooth are among my preferred destinations. With regard to the preferred course, I’m not exactly sure yet but I have narrowed my ideas down to primary teaching, history and politics, psychology and social studies.

“I am tempted to enter the primary teaching profession but I also have a very keen interest in history and politics as mentioned above and I am quite curious about psychology as well as learning about the treatment of mental health problems,” he says.

Cathal says that while guidance counsellors do their best to help students with the limited time they have, students are under pressure to choose their course “while trying to prepare for or complete the most challenging exams of their life”.

“They are not given sufficient time to choose their courses following the exams. This should be changed,” he says.