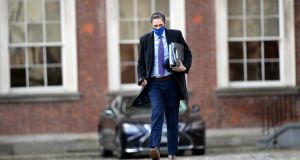 Minister for Further and Higher Education Simon Harris: ‘The conversation among school leavers about the range of options gets shut down once the CAO form is presented.’ Photograph: Dara Mac Donaill

Leaving Cert students will be able to choose between CAO and further education options at the same time from next year under plans to tackle “academic snobbery” over alternatives to third level.

Minister for Further and Higher Education Simon Harris said there is a growing number of high quality options for school leavers in the further education and apprenticeships sectors.

However, many families discount these options due to a “snobbish attitude” that they are for other people, he said.

Work is underway to create a single portal in time for the next academic year which will give parity of esteem to all options and allow students to apply for higher and further education courses at the same time.

In addition, he says, work is being advanced to build a “fully integrated” further education and higher education system which will allow students to transfer seamlessly from one to the other.

It is part of a broader plan to enhance the status of the further education sector and create more diverse pathways for school leavers.

Tackling this is likely to involve a “common credit system” which would allow students transfer from one sector to the other.

At present, links between further education courses and third level are largely ad hoc and vary from college to college and course to course. They can also depend on a student having achieved a certain number of CAO points.

A new common credit system, he said, would make it much easier for students to move from one system to another.

“I think the conversation among school leavers about the range of options gets shut down once the CAO form is presented.

“The CAO does a great job, it’s a very efficient piece of machinery. I’m not knocking it. But I think there are an awful lot of people that go through life and realise there were more options available to them than they realised at the time.”

He said some new “earn and learn” options in the apprenticeship sector allow learners to secure degree or even master’s level qualifications.