Closures put calculated grades back on the agenda for Leaving Cert, and plunge families with special needs pupils into crisis 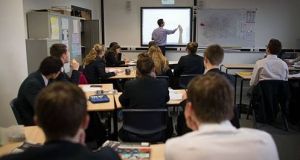 “The preference for almost everyone – teachers, principals, school managers and students – is to have a traditional Leaving Cert instead of calculated grades. The longer schools close, the more difficult it is to stage the traditional exams.” Photograph: Getty Images

The Government decision to open schools for Leaving Cert students and special needs pupils was reached during a Cabinet meeting on Tuesday afternoon. Within hours the plan was unravelling fast.

The first warnings came during stormy behind-the-scenes meetings between Department of Education officials and education stakeholders on Tuesday while the Cabinet meeting was still under way.

“We’d been kept in the dark on the plan to return students to the classroom,” said one education partner, speaking on condition of anonymity. “It was dropped on us. Normally we’re consulted through back-channels on proposals like this – but it caught everyone off guard.”

Teachers’ unions were soon up in arms over the health risk facing its members, many of whom would be trying to juggle childcare.

Principals baulked at the logistical problems posed by combining a partial return to school with remote tuition.

Many students were also threatening not to return to the classroom.

Within the Department of Education there was a determination to try to reduce the damage of learning losses linked to the last school shutdown, say Government sources. “Special needs pupils had lost out most during the previous closure, so the priority was to reopen special schools and special classes,” the source said.

Many who were unable to engage with online learning ended up regressing and losing key skills.

In addition, there was a strong desire within the department to get sixth-year students back in the classroom. Senior Cabinet sources say this was discussed at the Cabinet subcommittee meeting on Tuesday before being approved by Cabinet on Wednesday but, nonetheless, other political sources were surprised at the inclusion of Leaving Cert students when the focus before had been on special needs.

“The Leaving Cert proposal, which seemed to come out of nowhere, capsized it,” a Government source said.

“The preference for almost everyone – teachers, principals, school managers and students – is to have a traditional Leaving Cert instead of calculated grades. The longer schools close, the more difficult it is to stage the traditional exams.”

The advice of chief medical officer Dr Tony Holohan at a meeting of the Cabinet sub-committee on Covid-19 on Monday gave department officials and politicians hope that it allowed for the return of school.

While he said schools were “safe environments”, Dr Holohan highlighted the risks associated with the movement of an estimated one million children being dropped to and from school.

“It was a proportionate response to allow for 61,000 Leaving Cert students and 18,000 special needs pupils,” says one political source.

Yet as far as teachers’ unions and principals’ groups were concerned, the public health message they were hearing was very different.

“At the same time Tony Holohan was saying in press conferences that ‘I’ve never been so worried’ and that virus transmission rates were sky-high,” said one union source, “we getting an avalanche of calls from members who were terrified at the prospect of returning to class.”

Another said: “The mantra was ‘schools are safe’. Yes, they were safe until Christmas – but no one was able to say how safe they could be in the midst of a surge in Covid-19 cases with new variants. We weren’t able to reassure our members on any of this.”

A series of hasty meetings with unions, school managers and principals were held on Wednesday and Thursday – including briefings with Nphet officials – in an attempt to get education partners back on side.

Education officials were also appealing to special needs campaigners to sell the benefits of reopening schools for the most vulnerable pupils.

One secondary school – Alexandra College in Dublin – announced to parents that it would defy the Government plan to partially reopen to sixth-year students.

Several special schools and primary schools also told parents they would not be in a position to reopen to special needs pupils.

Soon school managers and principals’ groups were telling the department privately they would not be in a position to reopen.

The final straw came when the secondary teachers’ union ASTI announced that it was directing members not to attend school on Monday.

Shortly before 9pm on Thursday evening, Minister for Education Norma Foley finally announced that all schools “regrettably” would remain closed from Monday.

If any schools are to reopen most accept the priority will be special needs pupils and ensuring they can be supported.

The issue of vaccination of teachers, and their priority in the State’s list for inoculation, will re-emerge. However, the overriding frame for the order is vulnerability to severe outcomes , so in general teachers will not be seen as a priority.

“In general they’re a young healthy population, so you’ll be asking to put them above someone with vulnerabilities,” a source involved in the rollout said.

The possibility of cancelling or postponing the Leaving Cert now looms larger if schools remain closed for a number of months.