Should the State fund religious schools?

Unthinkable: Children have a right not to be indoctrinated, argues professor of philosophy Desmond M Clarke, and schools that discriminate on religious grounds should not receive funds 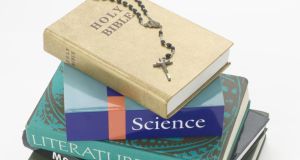 The principle of freedom of conscience is as important as majority decision-making. Photograph: Getty Images

The relationship of church and state in education is under renewed scrutiny. Plans to create more diversity in patronage have fallen flat, and promised legislation on both admissions and workplace equality has yet to materialise.

In the wake of this month’s Equality Tribunal judgment criticising a Catholic school for asking a job applicant for her views on “homos”, fresh questions are being asked about whether denominational schools have been given excessive powers to protect their ethos.

These questions are not new to Desmond M Clarke, emeritus professor of philosophy at UCC, who has written extensively on education and other policy matters during a long academic career that is being honoured this evening by the Royal Irish Academy.

For Prof Clarke, analysing the proper role of church in education starts with disentangling competing rights claims. It has been claimed that Catholics have a right to send their children to Catholic schools but “the alleged right is based on nothing more than the theology of that particular church”, Clarke has argued.

A very different right needs to be considered, he says, thus providing today’s idea: “Children have a right not to be taught in an uncritical way about values and convictions.”

Should the State fund denominational schools?

Desmond Clarke: “If ‘denominational’ means schools that use admission policies to discriminate against applicants on the basis of their religious or philosophical beliefs or affiliations, the answer must be no.

“Churches or other religious groups have a right to own and operate denominational schools, on condition that they satisfy reasonable educational standards. But if a state finances denominational schools or transfers the management of its educational services to selected churches, it goes too far (beyond its jurisdiction and competence) by supporting their religious or ideological objectives.

“This is not a newfangled liberal theory. In the late 17th century it became apparent that states should remain neutral between the competing claims for financial, legal, or administrative support from different churches or ideologies. It is also required by Article 44.2.4 of the Irish Constitution, and by Protocol 1, Article 2 of the European Convention on Human Rights.”

Regardless of what the Constitution says, what would be the ideal way of organising our education system, given that a majority of parents seemingly wish to send their children to Catholic schools?

“We have given up the idea that the state, in its laws, should enforce the moral theology of a particular church. The next big step is in education.

“The Catholic Church, through canon law, requires parents to send their children to a ‘Catholic’ school and, through them, demands that the State fund schools under the management of the church. It then appeals to a principle of majority rule to implement its evangelical ambitions; for example, ‘a democratic state must accept whatever a majority decides about any issue’.

“There are many things that can be decided, in practice, only by voting, and we nearly all accept the downside of this arrangement: we may end up in a minority on different issues. But there are some things that are so important they should be protected even against majority rule (although here too we may have further disagreement). One such issue concerns the religious and philosophical convictions of citizens.

“So even if most citizens believe their religious or ideological beliefs should be integrated into the curriculum of state-funded schools in such a way that no child attending such a school can avoid being indoctrinated, the state should refuse to comply with their demands.

“Why? To defend the principle of freedom of conscience, which is as important as majority decision-making.

“The viability of a political community depends on holding on to many principles that are often in competition. If one insisted that publicly funded schools should always reflect the beliefs of the majority, then the results would be obvious in a state where a voting majority is Marxist, Muslim, Mennonite or Calvinist. If that is unacceptable to Catholics, it cannot be avoided by inviting a state to decide which theology is ‘true’, since states are incompetent to decide that question.

“Ideally, when a democratic state becomes involved in providing healthcare or educational services to its citizens, it should deliver them in a way that respects the rights of individuals and does not discriminate against some because of the religious beliefs of others. In practice, it should provide an educational system that all citizens can attend without being forced to share the religious or ideological beliefs of the majority. It can do that easily, without interfering in whatever parents may choose about their own children’s religious education.”

What rights, if any, does a child have not to be indoctrinated by his or her religious parents?

“‘Indoctrination’ is a loaded term; it would require an extensive analysis to give any answer that is not open to obvious objections.

“One key element is whether teaching is uncritical. The education of any child cannot be value-free. The question, then, is whether parents (and schools) not only communicate to children their moral or philosophical convictions, but also provide reasons, appropriate to their level of maturity, that support those convictions.

“Although it would require much more space to explain and justify this claim adequately, children have a right not to be indoctrinated, ie not taught in an uncritical way about the values and convictions that we think are significant for their wellbeing and their shared life in a viable political community.

“To treat them otherwise is to fail to respect, in them, precisely the values that we aim to communicate.”

Is teaching philosophy in schools a good idea?

“Yes, but only if it’s done critically. What turns education into indoctrination is not its content but its mode of communication. So even philosophy can be (and has been) taught in a doctrinaire way.

“Schools in France have been teaching philosophy since the 16th century, in what were equivalent to second-level colleges. And it is obvious that children are capable of reasoning at a very early age.

“An education that develops children’s natural critical skills and encourages them to ask for reasons – especially for what their teachers tell them – is likely to improve the level of political debate in a society and to encourage the toleration and mutual understanding of difference that underpins a peaceful society.”

Who is your favourite philosopher?

“Among recent or contemporary philosophers, probably the late Brian Barry; among the long dead, René Descartes (1596-1650). Descartes lived most of his professional life alone in the Netherlands, where he was condemned and threatened with civil penalties by Calvinist theologians. His writings were also condemned posthumously by Rome (1663).”

Prof Desmond M Clarke is the author of 15 books, including an introduction to – and translation of – the Penguin edition of Descartes’ Meditations on First Philosophy. Along with physicist Prof Werner Nahm, he is receiving a Royal Irish Academy gold medal on January 27th under an honours scheme sponsored by the Higher Education Authority