The teachers dispute continued with protests held to highlight teacher objections as to how students would be assessed under a reformed junior cycle. 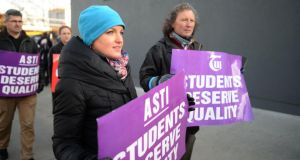 Teacher unions expect up to 27,000 members to protest outside secondary schools across the State on Thursday. Claire Grant (ASTI) and Jimmy Kelly (TUI) at a protest earlier this year outside Newpark Comprehensive in Blackrock, Dublin. Photograph: Dara Mac Dónaill/ The Irish Times.

Teacher unions expect thousands of members to protest outside secondary schools across the State on Thursday.

The demonstrations, organised by the Association of Secondary Teachers Ireland (ASTI) and the Teachers’ Union of Ireland (TUI), are to highlight objections to how students would be assessed under a reformed junior cycle.

A spokeswoman for the ASTI said teachers from about 750 schools would be protesting during their lunch breaks and that 27,000 people were expected to take part.

Minister for Education Jan O’Sullivan said the issues would not be resolved at school gate but around a negotiating table. She said no further meetings had been scheduled with unions about the proposed reforms.

“Across the community there’s a total understanding that the junior cycle needs to be reformed that the total reliance at the end of three years, very important years, is not doing justice to what we need to measure,” she said.

Ms O’Sullivan said there had been a lot of changes to the reforms since the unions had originally held ballots on them.

“What we want to do is report on parents on a students’ basis across a range of areas.,” she said.

With exam time approaching for second-level students, Ms O’Sullivan said that having further strike action would be “completely disproportionate”.