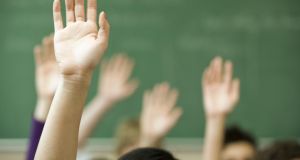 When it comes to pupils not accessing schools, the real issue is not religion but a lack of resources, says Catholic Primary Schools Management Association general secretary Seamus Mulconry. Photograph: iStock

Earlier this year Minister for Education Richard Bruton launched an extensive consultation on the role of religion in school admissions.

He did so in response to a Labour Party Private Members’ Bill and following an intensive lobbying campaign characterised by snappy soundbites, anecdotes and a dearth of real data.

After the consultation, Michael Barron, the executive director of Equate, recently called on the Minster to “simply amend the Equal Status Act so a child’s religion can no longer be used in any respect as a criterion for admission to State-funded schools”.

Sadly, as any responsible, fact-based policymaker knows, simple solutions to complex issues do not exist.

In the case of the admissions policy the net impact of this “simple proposal” would be to destroy the Protestant educational system in this country overnight.

It would potentially have a major impact on the long-term survivability of the Protestant community in the Republic.

It is important to note that when it comes to access to schools, Mr Barron’s proposal would not add one extra school place to the system, nor would it address the real and growing oversubscription crises in areas of rapid population growth such as Swords and Greystones.

Unintended consequences are always a risk in policymaking but this is the first case of a policy proposal I have seen where the intended policy would have virtually no impact on the real problem but have a devastating impact on an entirely innocent community.

It is the policy equivalent of a drive-by shooting, where the shooter targets a group of innocent bystanders in the vain hope that that a stray bullet might wound their real target.

It is a proposal which demonstrates an appalling contempt for the human rights of the Protestant community as well as simply incredible ignorance of the central importance of local Protestant schools to established communities throughout Ireland and to newcomers to our shores such as the rapidly growing Pentecostal community.

There is no barrier to entry to a Catholic Deis school apart, perhaps, from parental snobbery

Equate’s real target is, of course, Catholic schools. However, the simple fact is that no Catholic primary school wishes to turn away any child and where space exists we take everyone. The only barrier to entering a Catholic school is a buildings barrier.

In some parts of Dublin our schools don’t have the space to meet the demand, even when they have converted the school library or the computer room to classrooms or raised the age of school entry.

I am also well aware of principals who have been pleading in vain with the Department of Education for the resources to meet increased demand and in Swords I am coming to the conclusion that the demand may well justify an entirely new school.

In short, when it comes to pupils not accessing schools, the real issue is not religion but a lack of resources; and legislation, however well-intentioned, will solve nothing.

Intriguingly, I should also point out that we have been unable to identify a single Catholic Deis [Delivering Equality of Opportunity in Schools] school which is oversubscribed.

In short, there is no barrier to entry to a Catholic Deis school apart, perhaps, from parental snobbery.

Much as Equate might like to do this the role of religion in admission cannot be dealt with in isolation.

One of the contributing factors to oversubscription in some areas (as highlighted in a number of articles by Irish Times journalist Kitty Holland) is the practice of other patron bodies which do not operate catchment areas taking pupils from all over Dublin, and therefore putting increased pressure on local Catholic schools.

This also, of course, makes demand management planning by the department extremely difficult, if not impossible. Strangely, however, it is our schools who get blamed for the resulting problems.

Sound public policy must be driven not by ideology, slogans or opinion polls but by evidence.

Tackling oversubscription requires the implementation of a common applications policy in areas of oversubscription so that we understand the real level of demand and targeted investment ensure that the buildings exist to take in all pupils who need a space.

The Irish primary school system is delivering a high-quality service despite being run on a shoestring of 92 cents per pupil per school day, and a minor works grant that may or may not arrive in the autumn.

All of the evidence shows that primary schools provide a welcoming, inclusive environment in which all our children can flourish.

The Catholic Primary Schools Management Association fully supports investment in an increased plurality of patronage and real choice for these who want a secular education.

But we are not prepared to see Catholic schools blamed for problems which are not of their making, and which given the proper resources they would be more than happy to play a role in solving.