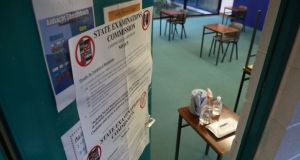 It will be in the interest of most students to opt for both calculated grades and sitting the exams. Photograph: Nick Bradshaw

I thought there was an agreement on the Leaving Cert plan – but now I hear teachers’ unions complaining. What’s going on?

The Government decided on the format of the exam on Wednesday following consultation with the leadership of teachers’ unions and other education partners.

There wasn’t a formal agreement, as such, though there were informal signals of what was likely to be acceptable for teachers.

The executives of the teacher unions are now digesting the details of the Government plan and are due to adopt formal positions soon.

So, is the Leaving Cert plan in doubt?

It’s unlikely, according to insiders. While teachers’ unions have concerns over various elements of the plan, and want further clarification, most feel these issues can be ironed out in talks.

Legislation will be enacted to give legal footing to the exams this year which, in theory, could oblige teachers to take part in the process.

Will they formally agree to the Leaving Cert plan?

The Teachers’ Union of Ireland’s (TUI) executive met on Wednesday night. While it has concerns over elements of the Leaving Cert plan and wants further talks, it looks set to facilitate them. It is consulting with members and likely to adopt a formal position soon.

The Association of Secondary Teachers of Ireland’s standing committee is due to meet soon. While the leadership shares many of the TUI concerns, it has said it is keep to avoid stress for students.

What are unions' main concerns?

The  fact that calculated grades this year – or accredited grades, to give them the formal title – will not rely on externally assessed elements such as orals, coursework or projects is a big issue.

For example, students have already submitted their home economics projects which have been assessed by the State Examinations Commission. Yet, these will not be relied on for calculated grade.

There is also a concern that the Leaving Cert written exams will go ahead without any major modifications. Teachers say additional choice or fewer questions are needed, in light of the disruption to students’ education.

Could there still be changes to Leaving Cert plans?

It’s certainly possible that some detail will change – but the overall structure looks set to remain.

I’m not sure whether to opt for calculated grades or the exam. What’s the best option?

It will be in the interest of most students to opt for both: calculated grades and sitting the exams. In that way, students will be covered on both fronts and will benefit from the highest grade.

Will I receive two separate sets of results?

No – students will received a single set of results which will include the higher of the two sets of grades, where relevant, in August. Students will be able to see a breakdown of both results at a later date.

Will there be modifications to the exam timetable and papers this year?

Additional choice is factored into the exam papers to reflect disruption to the school year. This was flagged last year and has been revised since.

However, the exams will follow the same format and duration. They are due to begin on Wednesday, June 9th, and will continue until June 29th.

The State Examinations has today published the exam timetable (examinations.ie).

How will orals and practicals be conducted this year?

They are due to take place over the Easter holidays and potentially beyond this point.

Schools will be required to source qualified teachers to administer the orals which will be recorded and uploaded to the State Examinations Commission. Coursework and projects will continue as normal, with additional time provided. Some practical components won’t be able to go ahead

What practicals components won’t go ahead?

Some components are difficult from a public health point of view to stage, such as practical skills tests for constructions studies and engineering, as well as a performance test in PE.

How will calculated grades be determined?

As with last year, the professional judgement of each of the candidate’s teachers which be used.

There will also be a form of in-school alignment to ensure fairness among candidates at school level, and approval by the school principal of the estimated subject scores.

Calculated grades and exam outcomes will have regard to the pattern of results in 2020 and previously. More details of the process will confirmed over the coming weeks and months.