The ETHX campaign group has protested for what they call postcode equality in education. A new secondary school being built in Harolds Cross will exclude access to pupils from nearby Dublin 8 and 12. Video: Bryan O’Brien 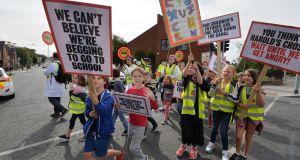 Hundreds of parents and children protested through the streets of Dublin on Friday to highlight “postcode inequality” which is preventing them from accessing a new multidenominational secondary school on their doorstep.

A new 1,000-pupil post-primary school is set to open in Harold’s Cross next year and will primarily serve the Dublin 6 and 6W area.

However, parents in the Dublin 8 and Dublin 12 parts of the city say their children will have no right to attend the school, even though many live less than five minutes’ walk away.

They argue that they are severely lacking in choice for multidenominational second-level education.

Roisin Kelly, a spokeswoman for a campaign group called ETHX – which represents parents in the area – said many pupils ended up passing Harold’s Cross and crossing the city to access multidenominational secondary schools.

Parents of children in the Dublin 8 area, she said, were paying €45 a week per child for a private bus to travel 50 minutes in rush-hour traffic to access Sandymount Educate Together Secondary School.

She called on Minister for Education Joe McHugh to ensure students in the Dublin 8 and 12 areas were included in the catchment area for the new Harold’s Cross school.

“The decision to restrict pupils to Dublin 6 and 6W doesn’t make sense. They are meant to be increasing access to new schools. Instead, they are limiting it,” she said.

“We have parents in Dublin 8 and 12 crying out for a second level multidenominational school. This school on our doorstep cost €23 million. Yet students from more privileged areas only will be allowed to access it.”

The department has said in correspondence that existing schools in the Dublin 8 and 12 areas have sufficient capacity to accommodate demand in the area.

While the Harold’s Cross secondary school will primarily serve the Dublin 6 area, it will have additional capacity and it will be open to the school to give priority for these places to feeder schools in surrounding areas.

In addition, Mr McHugh has indicated that discussions between Educate Together and City of Dublin ETB have started over a “possible partnership” over the running of St Kevin’s College on the Clogher Road in Crumlin, Dublin 12.

Sources have said the Minister was supportive of the initiative which he believes has the potential to increase the diversity of provision in existing schools.

However, the ETHX campaign group has reiterated its call for the Minister to expand the catchment area of the new school.

It estimates that more than 1,000 pupils based in Dublin 8 and 12 are travelling each day to attend non fee-paying schools schools in the Dublin 6 and 6W area,

“It makes no sense that they cannot access this new school located on their doorstep,” the campaign group said.