Parnell Summer School to focus on the “French Connection” 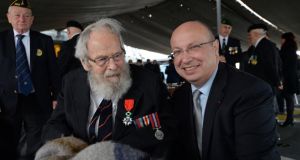 D-Day veteran Michael d’Alton from Dalkey, Co Dublin, who was presented with the Chevalier de la Légion d’Honneur by Jean-Pierre Thebault, the French ambassador on board the French Navy Command and Support Ship Somme, in Dublin Port. Photograph: Eric Luke

The theme this year is “The French Connection”, reflecting on the parallels between France and Ireland, and celebrating the cultural, intellectual and political associations between the countries.

The Parnell Society says it is expecting up to 100 guests a day for the five-day event, including members of the public, academics, postgraduate students and many “faithful regulars”.

The summer school has been running for more than 25 years, and academic director of the society Felix Larkin described it as a “very popular operation”.

“Apart from the scholarly side of it, it’s actually quite good fun,” Mr Larkin said. “Avondale is a lovely place and it’s a very relaxed atmosphere.”

The summer school will be officially launched by the French ambassador Jean-Pierre Thébault, with lecturers and panel discussions by speakers including barrister Frank Callanan, Irish Times journalist Stephen Collins and professor of Irish studies at the Université de la Sorbonne Nouvelle Wesley Hutchinson.