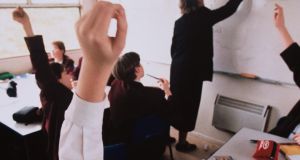 Psychologists say they feel under pressure from parents and schools to give exemptions for the study of Irish to students who do not qualify for the opt-out, according to an official review.

Irish is compulsory at primary and second level of the education system, however, there are opt-outs available for pupils with special needs or who have been abroad for a period of time.

Those who secure exemptions on special education or disability grounds are required to have a psychologist’s report.

A Department of Education review of Irish exemptions has found that some psychologists indicated “they were coming under pressure from schools and parents to carry out assessments in support of exemptions despite this being inconsistent with best practice guidelines”.

It also found psychologists reported a widespread belief among parents that exemptions confer an advantage on students.

“It is apparent that entitlement feeds demand and because psychological assessment is the key to accessing exemptions, demand for such assessments appears to be growing,” it adds.

The findings are contained in the Review of Policy and Practice in relation to Exemptions from the study of Irish, which has been published by the department. It found a wide variety of practices among schools, who have the authority to grant Irish exemptions under department rules.

As reported in The Irish Times last week, it says there has been an increase in the number of pupils securing opt-outs on the basis of “stress or anxiety” linked to study of the language.

In these cases, anxiety stemmed from pupils’ strong dislike for the language, difficulties in completing homework, and was linked to bedwetting, unwillingness to go to school and refusal to learn Irish.

“In some of these instances, factors relating to parents may have been a contributory factor to the pupil’s negative attitude towards Irish,” the report adds.

The review also notes that thousands of students with exemptions go on to study a modern foreign language such as French or German for State examinations.

Many are also securing exemptions in the run-up to State exams such as the Junior and Leaving Cert.

Minister for Education Joe McHugh has launched a public consultation seeking the views on the 25-year-old system for granting exemptions.

“Our understanding of children’s learning, and especially children’s special educational needs, and the advantages of bilingualism have developed deeply in this time,” he said.

Parents, students and stakeholders can contribute to an online survey which will continue until Friday, January 11th, 2019.