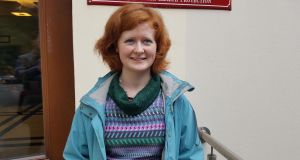 Máirín Rua Ní Aodha: The move to Poland happened within a month to six weeks.

Wroclaw had many attractions for me. I always knew I would fly the nest. I wanted to study abroad.

I wanted to live in a new country and there was also the practical element where the points system in Ireland is pretty crazy! So, I did very well in my exams but I knew regardless of whether I got the points for UCD or not that I wouldn’t go there.

I looked at different veterinary universities around Europe – I went to Lithuania, I went to Budapest and then I came here. I fell in love with the city first of all and when I saw the facilities here I was really impressed.

When I first came, the city was about to become the European Capital of Culture. There was so much going on and being from an artsy background myself – I am mad into body painting, I did experimental theatre growing up and I play the harp – so it was really important for me to still be able to have those elements of my life to have some continuation of the artistic things as well as the scientific and the academic.

I was the first Irish person to apply here – let alone come here. They were intrigued and I was as foreign to them as they were to me when I first came here. They had no idea how the Irish education system worked so I had to come here and do an interview.

The interview process now has been developed. It is more sophisticated now that they are more familiar with the Irish education system and its standards. But, I was a guinea pig – I had to come here and they asked me a lot of different questions.

I sat the oral test which even for me was very foreign because as you know of course we have oral exams in our languages but we don’t do that in science so that was new. Then they showed me around the university and then they interviewed me about my motivation and why I wanted to study this subject. They were very happy with my motivations and my academic standards. And that was it – I was in!

That is one thing I would say. It is so wonderful for any student – be they Irish or international –is that it is so exciting. You are out here, you are on your own, the independence of it, the freedom of it.