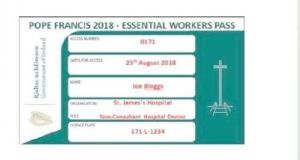 The Office of Public Works (OPW) has defended its decision to include the symbol of a cross on the pass needed by workers entering controlled zones in Dublin during Pope Francis’ visit this weekend.

The pass, which will be issued to those travelling past Garda cordons during the pope’s visit, including healthcare workers, was criticised by Senator Lynn Ruane earlier this week as “disrespectful”.

Ms Ruane said she had been contacted by employees at St James’ Hospital who she said were “disgusted that they are required to wear a badge with a crucifix on it”.

“They were told they can’t go to work without it. We have such a diverse workforce in hospitals of varying religions and none. Disrespectful,” she wrote in a message posted on Twitter.

A spokeswoman for the OPW said all passes issued would show a “geographical indicator” signifying which controlled zone the “essential worker” would have access to.

“The pass in question for Dublin shows an image of the steps and the Papal Cross which represents the closing event taking place in the Phoenix Park on Sunday 26th August,” she said.

The pass will be required by any essential staff arriving in controlled zones by car over the weekend. However, any workers travelling into the city by foot, bicycle or public transport will not need to display the pass.

A spokeswoman for the World Meeting of Families refused to comment on the design of the pass, saying they were not issued by their organisation.

Separately, residents of a central Dublin street have been asked to carry photo ID and provide the names of all those who will be at their address on Saturday to gardaí ahead of the papal visit.

Pope Francis will pass through Church Street as part of his two-day trip to Ireland and is to visit the Capuchin Day Centre for homeless people, which is located on nearby Bow Street.

Church Street residents have received a flyer informing them they need to provide gardaí with the names of all those expected to be at their address on Saturday.

A Garda spokesman said the notices “were issued to establish how many residents/family members will be in the area”.

He said the flyers were necessary as there will be “limited space available” on the street during the visit.

“In order to manage and ensure the safety of all concerned, access to this specific location will be curtailed,” the spokesman said.

Meanwhile, medics have expressed concern that Dublin’s hospitals will “not be able to cope” with the demands of Sunday’s papal mass.

The Irish Association for Emergency Medicine, which represents emergency medicine specialists. estimates up to 750 extra people will require hospitalisation.

However, it says organisers have left it too late to start planning for the effect the influx of 500,000 people into the Phoenix Park – many of them elderly – will have on the health services.

Necessary extra funding for hospitals has yet to be confirmed, and the assumptions about the extra workloads involved “appear to have been unduly conservative,” the association said in a statement.

The association said Dublin emergency departments were struggling to bring in extra medical and nursing staff because of ongoing staff shortages while the onsite medical facility planned for the venue to stabilise critically ill patients was yet to be adequately staffed.

In response, the HSE said medical services planning for the papal visit started earlier this year. It said there was a “robust medical plan” in place for those visiting Dublin city centre and the mass in the Phoenix Park.

“More than 1,000 medical providers from around the country will be on duty, with a skill set ranging from community first responders to doctors,” it said, in a statement.

“Over 26 aid posts will be in place along the numerous pedestrian routes and within the Phoenix Park.”

“These services will be in place from early morning to late that evening to ensure they are available to people travelling to the event, during the event, and when leaving the event.”