One in three new teachers say they will leave profession 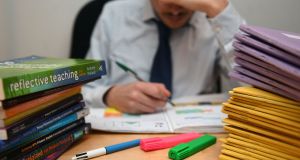 Almost a third of new teachers believe it is unlikely they will still be in the profession in ten years’ time, according to a survey by the Teachers’ Union of Ireland.

The 17,000-strong union, whose annual conference gets under way on Tuesday, is calling for an acceleration of pay parity and an end to discrimination against younger teachers.

Austerity-era pay cuts mean that younger teachers are on lower pay-scales than their more experienced colleagues, though the gap has narrowed with the recent restoration of some qualification allowances.

In an online survey of more than 800 teachers carried out last month, a large majority (81 per cent) said differentiated pay rates have had a negative effect on staff morale.

The survey also examined workload issues, with the vast majority stating that bureaucratic duties regularly deflect from their teaching.

A similar proportion believe their workload has increased significantly in recent years.

TUI president Joanne Irwin said the findings confirmed the harmful effects that discriminatory pay rates are having on the morale of the profession.

She said progress has been made with the restoration of the honours primary degree allowance.

However, at a time when schools are struggling to attract teachers due to more lucrative options in other employments, she said the process of pay equalisation requires urgent acceleration.

Ms Irwin said next necessary and logical step in the process is the restoration of the allowance for teaching qualifications – the professional master of education, previously the H.Dip.

“Our campaign will continue until all teachers have the same pay rates, regardless of whether they entered the profession before or since 2011,” she said.

The union has submitted a detailed case for reinstatement of this allowance with the Teachers’ Conciliation Council, the industrial relations forum for teachers.

The survey also highlights that many teachers believe their work has become excessively administrative in nature, deflecting from core functions of teaching and learning.

This, the union said, is a legacy of an era of cutbacks that worsened the pupil/teacher ratio, dismantled middle-management structures and restricted guidance counselling provision.

It said these “anti-educational measures” have increased teacher workload and damaged the effectiveness of schools and the support network for students.

Ms Irwin said the result is that that students lose out when “time is stolen from teaching and learning”.

While second-level teachers are sometimes accused of having light workloads and long holidays, the union says this does not stand up to scrutiny internationally.

It says second-level teachers in Ireland teach on average 735 hours, far above the OECD average of 669 hours and the European average of 642 hours.