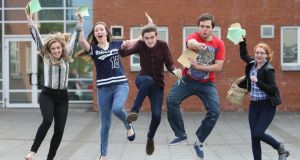 Northern Ireland’s school-leavers have again outperformed their counterparts in Britain when it comes to achieving top grades in their A-levels. However, they slightly underperformed when gaining A* grades compared to students in England and Wales.

The numbers in the North gaining A* grades increased slightly from 7.2 per cent to 7.3 per cent. However, this was lower than the average A* figure for England, Wales and Northern Ireland, which was 8.2 per cent.

The numbers studying biology, chemistry and physics increased 2 per cent, with maths up 0.9 per cent. Those studying English at A-level was down 4.6 per cent.

Michael Turner, director general of the Joint Council for Qualifications, said this year’s results were very stable. “As ever, students and teachers across the country have worked hard to achieve them, and should be congratulated for their efforts and the fruits of their labours.”

Thousands of Northern Ireland students will now start choosing university courses. Many will attend Queen’s University, Belfast, and the University of Ulster, while others will travel south or go to Britain to attend colleges in Scotland, England and Wales.

Unionist politicians in the past have complained of a Protestant “brain drain” from the North where a higher percentage of Protestant students than Catholic students who studied at third level in Britain did not return to Northern Ireland to live and work.

Recent figures show that at Queen’s University, the University of Ulster and the North’s two teacher-training colleges, there were 21,000 students from a Catholic background compared to 14,400 from a Protestant background.

Educationists will be studying if higher tuition fees in Britain – up to £9,000 compared to £3,685 in Northern Ireland – will lead to fewer students from both traditions attending universities in Britain.

The North’s Minister for Education, John O’Dowd of Sinn Féin, congratulated all the students. For those who were disappointed with their results, he said: “Not all pupils will get the results they were hoping for and I urge those young people not to worry. Help and advice is available to you, and I encourage you to speak to teachers, careers advisers and parents to discuss your future career or study path.”

The Alliance Party’s Minister for Employment and Learning Dr Stephen Farry spoke of the importance of students now making “informed and effective career-planning” decisions. “Taking time now to explore options will pay dividends in the future. There are many opportunities available to you and I would urge you to examine these fully.”