North’s teachers to strike over pay 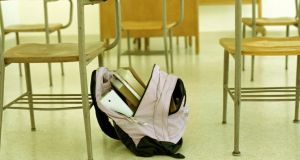 A rolling day of action is due to be held on January 31st. Photograph: Getty Images

Members of Northern Ireland’s largest teaching union are to go on strike over pay.

A rolling day of action is due to be held on January 31st by National Association of Schoolmasters/Union of Women Teachers (NASUWT) members in schools across Derry, Strabane, mid Ulster, Fermanagh and Omagh.

It follows a walk out in Belfast and Newtownabbey on November 30th.

Teachers have rejected an offer that would have delivered a 1 per cent rise this year, with rates for 2015/16 remaining frozen. Education Minister Peter Weir has claimed a bigger increase could only be afforded by making redundancies.

NASUWT general secretary Chris Keates said: “It is with deep regret that we remain in this position, but we have been left with no choice by the blatant disregard of the minister for education and the employers for the pay and conditions of service of teachers who provide such a vital public service.

“We have continued to make clear to the Minister that strike action can be avoided if there is an improvement on the 0% pay award for 2015/16 and a genuine commitment to meet with the NASUWT to seek to resolve our trade dispute.

“If the next phase of strike action goes ahead, it will be the responsibility of the ministers and the employers.”

NASUWT has 12,000 members in Northern Ireland across primary and secondary schools.

Mr Weir has previously stated he was prepared to discuss “realistic” pay proposals for 2017/18 onward but said there would be no more negotiations on the rejected offer.

Ms Keates accused the Minister of being unwilling to engage appropriately in discussions. She said the union also had deep concerns over adverse changes to pensions, working conditions and job loss.

In a letter to Mr Weir she wrote: “It is regrettable that, to date, your response to each of the issues the NASUWT has raised has been to say that these are matters for the Teachers’ Negotiating Committee.”

She added: “The current negotiating machinery is not the appropriate forum and does not have the locus to resolve the NASUWT trade dispute with you.

“Such resolution can only be secured through genuine engagement by the department of education with the NASUWT directly.”