Are junior cycle reforms on the right track? 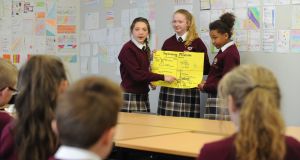 Every three years, half a million 15-year-olds in more than 70 countries take a two-hour test designed to measure their ability to think.

The release of the OECD’s Pisa rankings is a revealing moment for twitchy politicians and nervous civil servants.

In Ireland’s case, there was sharp relief when the results were released last month: Irish teenagers were among the best in the world at reading and significantly above average for maths and science.

But slippage in the rankings of Scotland and Sweden set alarm bells ringing in some circles.

Why? They, along with several other developed countries, are much further down a road of education reform that Ireland is just embarking on with the new junior cycle.

Lindsay Paterson, professor of education policy at Edinburgh University – and a long-time critic of these reforms – said Scotland’s Pisa figures were “shocking” and suggested the blame lay with its “curriculum for excellence”, introduced a decade ago.

Sweden, once regarded as a byword for high-quality education, managed to reverse a decade-long decline in its rankings. Yet, its overall performance is distinctly average for the developed world.

Critics in Ireland were quick to question why authorities were in the process of reforming a curriculum that – on the face of it – seems to be working very well for us.

Some members of the Association of Secondary Teachers in Ireland (ASTI) – which has opposed the reforms and banned members from training linked to the reformed junior cycle – saw the findings as a vindication of its stance to “protect education standards”.

Breda O’Brien, a teacher and Irish Times columnist, said some of the results indicated that Ireland was about the take a wrong turn on education.

“As usual, Ireland is coming late to the party and embracing what they consider to be new with evangelical fervour, blithely unaware of the serious questions raised in other countries,” she wrote.

Many national and international education experts, however, disagree.

They say Ireland’s curriculum reform is still the right approach and that comparisons with Scotland and Sweden are selective.

More pointedly, they say, they ignore strides being made by many other countries such as Singapore and Finland, which are successfully introducing similar reforms.

They also point out that Ireland’s relatively positive overall performance masks a real problem with student engagement and poor outcomes for our high-achieving students.

Mark Priestley, a professor of education at Stirling University in Scotland, is an expert on both the Scottish and Irish reforms.

He disagrees with the notion that Scotland’s curriculum for excellence is to blame for the decline in Pisa scores.

“This seems to be a simplistic explanation which ignores the complexity of educational reform in Scotland,” he says.

Rather, he says, the problems appear to lie in the translation of policy to practice, with a lack of buy-in from teachers into the new reforms.

Countries such as Finland, he says, have had much greater success in implementing reforms and getting teachers to buy into the changes.

He says the Irish reforms are “on the right track” and avoid many of the pitfalls associated with Scotland.

“The Irish reforms look far better thought-out in terms of implementation compared to our own,” he says.

Some crucial differences, he says, include less bureaucracy and a lighter volume of learning outcomes.

The point is backed up by the OECD’s director of education Andreas Schleicher, who says Scotland needs to move from its intended curriculum to an implemented curriculum.

As for Sweden, many educators say the decline in the country’s performance is linked to a shift away from a traditionally centralised education system towards a much more decentralised one.

In addition, the country’s performance is taking place against the backdrop of controversy over underfunding and the impact of immigration.

The notion that Ireland can simply rest on it laurels and keep doing what it has been doing doesn’t hold water for many educators in Ireland.

Many point to an influential ESRI report published a decade ago that found major problems emerging over the engagement of students.

“If we leave things as they are, we will continue to allow large numbers of students to switch off from learning for life,” says Frank Milling, chief executive of Ireland’s education think tank Change ED.

Junior cycle reform plans produced by the State’s advisory body on education, the National Council for Curriculum and Assessment, seek to boost children’s engagement and promote a much broader range of skills.

Broadly speaking, the changes being introduced in Ireland mirror those being adopted in many developed countries: a greater focus on developing skills rather than mastery of a set body of knowledge, along with a greater emphasis on individual learning and teacher autonomy.

It sees a change in the role of teachers, moving towards being less of a “sage on the stage” to more of a “guide by the side”.

Prof Michael O’Leary, director of DCU’s centre for assessment research, policy and practice, says policymakers regarded the junior cycle changes as a dry-run for the more challenging task of reforming the Leaving Cert.

But, he says, they never anticipated the kind of backlash that greeted the junior cycle plans.

The early plans ended up being significantly watered down in the face of opposition from teachers’ unions.

“One minister called the original plans a Rolls Royce version, though some would say what’s now being touted as change is more of an old Nissan Micra,” says Prof O’Leary.

While the changes embrace modern teaching, learning and assessment methods, the new junior cycle still retains a major written exam at the end of third year that accounts for some 90 per cent of marks.

The changes are being introduced in English this year, and will expand to other subjects over the coming years.

If successful, similar changes are likely to occur at Leaving Cert level over the coming years.

But there’s a problem. Just one in three schools will be in a position to deliver the changes.

That’s because they are either fully or partly staffed by members of the ASTI, which has voted to oppose the measures.

It has directed members to refuse to engage in any training linked to the changes, and not to provide cover for any colleagues who are being trained.

Their biggest source of opposition is that teachers will be assessing their own students for the first time in a State exam.

Prof O’Leary says it is unfortunate that most debate about the reforms has focused on assessment rather than the kind of skills it is hoped the reforms will produce.

“There are a whole bunch of skills which we are not emphasising at the moment which we should have a conversation about,” he says.

“We need to do down the route of future-proofing children’s skills. Look at the jobs being created nowadays. They couldn’t have been conceived of 20 years ago.”

Some teachers worry that the reforms – even in their altered state – go too far and do not place enough emphasis on mastering basic knowledge.

“This isn’t throwing the baby out with the bath water – there are very good aspects in the current system.

“We’re trying to improve on that and develop in line with modern, effective, education systems across the world. We’re well up there but we can always do better.”