Leaving Cert results: All you need to know about calculated grades

Confused about standardisation or school profiling? We answer all your questions 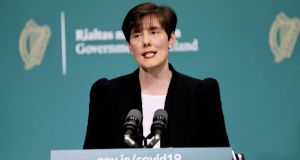 Minister for Education Norma Foley has acknowledged that grades for the class of 2020 will be “stronger” compared to previous yeares .Photograph: Julien Behal

How do I get my calculated grade results?
Students will be able to access their grades online using the student portal from 9am. The grades are also being made available to schools at the same time.

To receive your grades, you should again login to the Calculated Grades Student Portal (lc2020.education.gov.ie). A “before you begin guide” will be available on the student portal home page to guide you on how to access your results and print a statement of them.

What information will there be?
You’ll be able to view your results online and download or print a “statement of provisional results of Calculated Grades for Leaving Certificate 2020”. This is the only way to receive a hard copy of your grades; schools will only be provided with details of results electronically. Formal statements of provisional results will not be issued to schools this year.

The student portal will reopen on September 14th at 9am and will provide you with the subject percentage marks you were awarded by the calculated grades process. You may also access the estimated percentage marks provided by your schools. You can appeak any results online to get a re-check.

A breakdown of the results today shows teachers overestimated their students’ marks at all points in the achievement spectrum.

A large majority (79 per cent) of students’ estimated grades given by their teachers and schools will remain the same. The remainder will be either reduced (17 per cent) or increased (4 per cent).

What does this mean for CAO points?
The fact that calculated grades are higher is likely to result in higher CAO points for many courses.

However, the Government announced last week an additional 1,250 higher and further education places. These include hundreds of additional places for high-demand courses such as nursing, pharmacy, medicine and post-primary teaching. Colleges also have the option of adding hundreds of other places to in-demand courses.

This may take some of the heat out of CAO points race, which is largely based on supply and demand, but it remains to be seen by how much. Students will find out on Friday afternoon, when CAO round-one offers are issued.

I applied for college this year on the basis of my results in 2019? Will I lose out?
It’s not a level playing field for all this year. That’s because this year’s cohort of Leaving Cert students has been awarded higher grades than in previous years.

This is likely to place those applying on the basis of results achieved before this year at a disadvantage in the points race because their results were not quite as generously marked. It’s difficult to say by how much at the time of writing.

Department of Education officials say they had to achieve a balance between adjusting this year’s results to ensure they were in line with results in previous years and ensuring “fairness and acceptability” for this year’s cohort of students.

They say, however, that a “cascade” effect from the creation of additional higher and further education places should ensure that more students than ever will be able to get their first-place preference, which should ease some of the points pressure.

What information was used to determine my predicted grades?
First, the school issued an estimated grade for each subject based on what it thought you would achieve in the exam. It also supplied an estimated class ranking for you in each subject.

This information, according to the Department of Education, is at the core of the process.

As part of the “standardisation” process – in which grades are adjusted up or down for consistency – it also took into account the likely performance of your class based on how students fared in the Junior Cert, along with the historic pattern of Leaving Cert results nationally.

Why are students’ results being standardised anyway?
Even in normal years, Leaving Cert results are adjusted – or standardised – to ensure results are broadly consistent from year to year and to help avoid grade inflation. This year, it was used to ensure all students were treated fairly and to prevent students’ being given unrealistically high grades.

For example, this year officials found that the proportion of top grades awarded by some teachers had doubled or even tripled in some schools compared to previous years. As a result, some grades were adjusted to bring them into line with what was considered more realistic.

I’m in a school with a poor track record. Have I been penalised on the basis of this?
There were plans to include “school profiling” in the calculated grades process. This was due to take account of an individual school’s track record in the last three years in determining whether teachers’ estimated grades were accurate. However, this has been removed from the calculated grades process, in light of controversy in the UK which saw disadvantaged students disproportionately downgraded.

Department officials say the final calculated grades in Ireland do not impact unfairly on students in disadvantaged schools,

A breakdown of the new grades, for example, shows the proportion of downgrades for students in disadvantaged or Deis schools is smaller (13.6 per cent) compared to other schools (16.8 per cent).

I’m in a new school which has never had a Leaving Cert class. Could this have impacted on my calculated grade?
It shouldn’t have. Teachers were asked to use their professional judgement in estimating your grade and class ranking. The Department of Education says these were the most important pieces of information in the calculated grades process. As part of the “standardisation” process – in which grades are adjusted up or down – it says this took into account the likely Leaving Cert performance of your class based on how students fared in the Junior Cert. Historical data relating to Leaving Cert performance was drawn on national trends, rather than school-by-school trends.

I moved school in sixth year to a grind school. Did this affect my calculated grade?
Officials say moving school shouldn’t have impacted on a student or school’s grades. Again, teachers’ estimated grades carry the most weight.

How does the Irish system of calculated grades differ from the UK system?
Officials say there are three crucial differences: The Irish system, they say, gives “primacy” to teachers’ estimated marks. There is more precise information collected about student achievement, such as per centage marks rather than estimated grades. There are in-built systems to identify exceptional students, irrespective of the school they attended.

What happens now?
Results are being issued to students and schools at 9am on September 7th and CAO offers are due to be released on September 11th.

An appeals process opens on September 14th, while all students will be able to access their schools’ estimated mark.

How do I appeal?
Candidates can appeal any grade which they feel has been unfairly awarded using the online portal from September 14th. Unlike Leaving Cert appeals in previous years, however, it is largely limited to a data-checking exercise to ensure the intended information was recorded correctly by the school and that the national standardisation process conducted by the department was applied correctly. It will not involve reassessing a student’s past work or performance in projects, assignments and tests. If students are not happy with the appeal, they can go on to seek a review by independent appeal scrutineers.

Finally, candidates who remain unhappy have the opportunity to sit the 2020 Leaving Certificate examination in the subject(s) of their choice in November.

Will I get to see my school’s estimated grade?
Yes, but you’ll have to wait until the appeal process opens on September 14th. Students should be able to access it on the student portal. This will be the grade your school estimated for you prior to any adjustments under the standardisation process.

Minister for Education Norma Foley has confirmed that the exams will take the form of written papers only. Students are being advised that the written exams will be based on the normal question paper format, content and structure as in previous years.

The State Examinations Commission is currently working with the department.

If I sit the exam, will I need to do a language oral exam?
Marks will not be available for oral language or music performance tests on the basis that it would “not be feasible or practical” to conduct exams in these components, according to the Department of Education.

However, in the case of five subjects, examiners will mark coursework which was completed prior to school closure. These marks will be included in the grading of these subjects. These subjects include home economics; design and communication graphics; physical education; engineering; and the LCVP (Leaving Cert vocational) programme) portfolio.