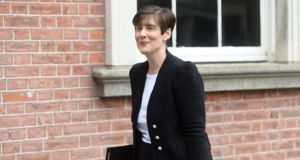 Minister for Education Norma Foley said there was a legal requirement that the students had access to the information. Photograph: Dara MacDónaill/The Irish Times

The Department of Education’s decision to allow thousands of Leaving Cert students to have online access to class rankings which their teachers assigned them from next week has been described as a “flagrant breach of trust” by the Teachers’ Union of Ireland (TUI).

Students had been due to receive the information on September 14th, a week after receiving their calculated grades but teachers’ unions had objected on the basis that the data was “highly sensitive” and would allow students to see where they had been ranked in a subject in each class.

The TUI, one of two unions representing second-level teachers, said it engaged in the calculated grades process on “a good faith, once-off basis and sought and received certain assurances”.

It said one such assurance was that the student ranking provided by a school would only be available to a student in response to a data access request.

“Ranking students in such a manner runs completely counter to the values of inclusive teaching and was only agreed upon on the understanding that it was to improve the accuracy of the data collected and would not be released in the manner now planned,” the union said in a statement.

“The departure from this agreed position is a fundamental breach of trust by the Department and is profoundly damaging to the student/teacher relationship.

“Release of class rankings in such a manner also has the potential to be extremely damaging for more vulnerable students, reinforcing stereotyping and stigmatisation, embedding disadvantage and serving absolutely no useful practical or moral purpose.”

The TUI also said that the proposed manner of release could result in “the personal data of many students being inferred or deduced and circulated without their knowledge”.

“This flagrant breach of trust by the Department is deeply disappointing and shows scant regard for vulnerable students. It will also make future trust-based collaboration extremely difficult,” it added.

Under the calculated grades process, teachers were required to award estimated percentage marks to their students and rank them in order of expected achievement. While the marks awarded were changed by the department’s standardisation process in many cases, the ranking given to a student was not changed. This class ranking data played a crucial role in determining a student’s final grade.

For example, students who were given an estimated H1 grade by their teachers were much more likely to be downgraded in the standardisation process if their class ranking was outside the cohort of top performing students in a class. Class ranking information is also likely to be relied on in evidence in any future legal actions relating to the calculated grades process.

The Association of Secondary Teachers Ireland (ASTI), which also represents post-primary school teachers, said its understanding throughout the calculated grades process was that students would be entitled to submit a data access request under data protection legislation and that the school’s mark and ranking for the individual would be made available to those who requested it.

“This has been a challenging year for Leaving Cert 2020 students and our hope is that these students can move on with their lives,” a spokeswoman for the ASTI said.

Minister for Education Norma Foley defended the decision to allow students more immediate access to their class ranking, saying if they had to pursue the information through a data request it would take a considerable amount of time.

It was entirely up to the student if they wanted to access the information, but they could access only their own rank order, Ms Foley told RTÉ Radio’s Today with Claire Byrne.

There was a legal requirement that the students had access to the information, she added.

With regard to concerns raised by the ASTI about the safety of teachers from Covid, Ms Foley said that a phenomenal amount of work had been done by school committees and that everything had been underpinned by public health advice, influenced by the World Health Organisation, the European Centre for Disease Control and the Irish public health authorities. All decisions in relation to schools were adjudicated by public health experts, she said. “We want the entire school community to be safe.”

Ms Foley said “all the experts say that schools are the safest places” but it was understandable that there was a degree of fear and anxiousness. “I have a fear every day about the consequences of practices.”

The ASTI has decided to ballot for industrial action over concerns it has over the safety of staff and students.

It has cited a number of issues including physical distancing in schools, provision of personal protective equipment (PPE), testing and testing turnaround times,and resources to facilitate remote teaching and learning.