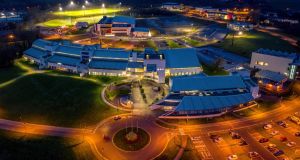 Earlier this week politicians gathered to cut the ribbon on the Kerry Sports Academy, a gleaming new facility on the grounds of the Institute of Technology Tralee.

The state-of-the-art facility – the largest sports capital project ever to have been undertaken in Kerry – boasts an international-sized indoor sports arena, hydrotherapy suite and high-performance gym.

Official speeches at the launch focused on the importance of developing the facility as it approaches the final stages of the creation of the Munster Technological University, in partnership with Cork Institute of Technology.

What they didn’t dwell on is growing concern over whether the institution will be able to afford the new facility.

In addition, the institute is running an operational deficit of about €1.5 million each year and facing serious cashflow problems.

Based on its own financial projections, it will continue to run significant deficits for at least three more years, which could see the accumulated deficit climbing as high as €10 million or more.

Unlike universities, however, institutes of technology are statutorily barred from borrowing, which means the taxpayer may ultimately be required to bail out the institution.

The financial state of the institute has been a concern for the Higher Education Authority for some time.

In 2016, it was labelled as a “medium-risk” and financially vulnerable institution. In more recent times, it has been reclassified as a “high-risk” institute, which prompted the authority to commission an independent examination of the institution’s finances.

This Deloitte report last year is understood to have found the institute was overstaffed, losing money and had significant cashflow difficulties.

Sources say it concluded these difficulties were linked to issues such as falling student numbers, high staff costs and uncertainty over how to fund the new Kerry Sports Academy.

Staffing numbers, however, have remained the same and it now appears to be overstaffed relative to its overall student numbers.

The €19 million Kerry Sports Academy has also been beset by a lack of certainty over funding, leaving the institute faced with trying to find millions from its own reserves which have been depleted for a number of years.

Far from easing concerns within the Higher Education Authority, the reports appears to have fuelled them further.

IT Tralee has projected it will generate a surplus in 2022 , with improvements driven mainly by a rise of more than 20 per cent in student numbers over the next five years.

But there is understood to be scepticism over these figures. Third-level student numbers nationally are only projected to rise by just 7 per cent over the same time-frame.

In addition, census figures for the Kerry area show a slight decrease in the college-going population over this time-frame.

Internal Higher Education Authority documents from recent months now show there is “serious concern over the protracted nature of this funding crisis”.

There has also been alarm at the quality of information received from the institution as well as doubt over the capacity of the institute to resolve these problems.

The authority has now appointed external financial experts to monitor and assist the institute in the management of its financial affairs.

All of this comes at a highly sensitive time for the education sector. Cork Institute of Technology and IT Tralee are at advanced stages in their bid to merge and become the country’s newest technological university.

Next week, international experts are due to arrive to assess whether the joint bid meets the threshold for it to be awarded university status.

In the background, however, there is growing tension between the two institutions, according to sources in both.

There is concern in CIT over whether it will have to absorb IT Tralee’s deficits.

CIT, by contrast, is running a surplus and has accumulated financial reserves, but sources say this would be wiped out if it is required to take on IT Tralee’s debts.

There is also tension between the two institutions over the distribution of senior management positions in any new entity.

However, under new plans for the institute, CIT – which is four times bigger than IT Tralee – now maintains that these should be distributed in line with the size of the institutions.

There are now real concerns in some quarters that financial woes and internal tensions could scupper or delay plans to establish country’s newest university. Much of this, however, will hinge on what international experts make of the situation when they visit next week.