Parents leaving it to schools to prepare children for sacraments

Communion and Confirmation more like ‘social occasions’ rather than religious events 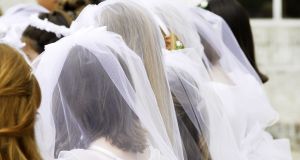 A survey reveals a strong demand for parents and local parishes to play a much greater role in preparing children for sacraments. Photograph: Getty Images

Ireland is unique in its dependence on schools in preparing for the sacraments. And, as any primary school teacher will tell you, preparation for Communion or Confirmation isn’t just a one-day affair. There is response learning, singing, church visits, procession practice, wardrobe fittings and photoshoots. All of this takes far more than the 30 minutes designated daily for religious education in the national curriculum.

Then there’s the wider question of whether the sacraments are at risk of becoming a social rather than a religious event. Many teachers say they have noticed a deterioration in children’s religious knowledge over the years. Some talk of how they end up having to re-teach students how to receive Communion in their Confirmation year.

One recalls a recent First Holy Communion ceremony where the amused congregation were unaware of when to sit, stand or kneel at any point during the Mass.

It’s clear that many parents are not engaging with church practices – though they expect it of their schools.

Society, generally, is also changing fast: more than a third of marriages are civil rather then religious, while census figures indicate that about a fifth of families of parenting age describe themselves as non-religious. Yet, we have a primary education system where 90 per cent of schools remain under the control of the Catholic Church.

It is against this backdrop that Archbishop of Dublin Diarmuid Martin last year announced plans to consult teachers, parents and parish personnel to “improve the preparation and celebration of the sacraments”.

Sacraments, he said, were not just “conveyor belts” or “social occasions” but “they are fundamentally moments of faith”.

The result – based on a survey of 1,800 school principals, teachers, parents, parishioners, clergy and parish workers in the archdiocese – reveals a strong demand for parents and local parishes to play a much greater role in preparing children for sacraments. All are saying that passing on faith is primarily the responsibility of the home, with the support of the parish – as well as the school.

The archdiocese says it is to hold meetings with parishes shortly to reflect on these findings.

Speaking to The Irish Times earlier this year, Archbishop Martin said schools in general felt religious formation should be outside schools and “we’re working on that”.

“For instance, this year everybody who wanted to be confirmed had to write, make a formal application addressed to me, again to emphasise that Confirmation isn’t a school subject, it’s a faith subject,” he said.

One obvious solution is to do what many multi-denominational schools have been doing for years: establish an “opt-in” system of sacramental preparation. This can involve classes which take place outside school hours either in the school premises or in local parish facilities. While it might end up in fewer children completing the sacraments, from the church’s point of view it could result in a higher proportion of more committed Catholics.

Another approach may involve parish programmes which aim to boost parental involvement by encouraging them to bring their children to Mass with them in the months leading up to Communion or Confirmation.

Taking sacramental preparation out of the school day, however, is unlikely to be the end of the debate over religion in the education system. While at present up to half an hour of each primary school day is allocated to religious education, a survey by the Irish Primary Principals’ Network found that the vast majority of principals felt less time should be spent on teaching religion in the classroom and more on subjects such as maths, English and physical education.

This, no doubt, will be a debate for another day.