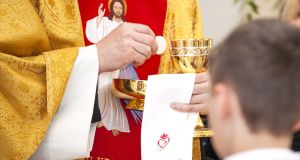 There is a strong demand for parents and local parishes to play a much greater role in preparing children for sacraments, according to the findings of a survey by the Archdiocese of Dublin. Photograph: Getty

Catholic schools want key preparations for sacraments such as Confirmation and Communion to take place outside the classroom, according to the findings of a survey by the Archdiocese of Dublin.

Instead, there is a strong demand for parents and local parishes to play a much greater role in preparing children for sacraments.

The findings are contained in a sacraments review group survey of 1,800 school principals, teachers, parents, parishioners, clergy and parish workers in the archdiocese, which covers Dublin and Wicklow and parts of Kildare, Carlow, Laois and Wexford.

The responses are to be discussed in parishes over the coming weeks to determine how they can be acted upon.

Potential changes flowing from the survey could result in an “opt in” approach to Confirmation and Communion in schools, with the bulk of preparation taking place outside school hours. This type of approach is common in multi-denominational schools.

The review group was established late last year by Archbishop Diarmuid Martin following concern that sacraments risked being turned into “social occasions” rather than moments of faith.

A spokeswoman for the archdiocese said a strong pattern in the responses is a desire for change “across the board”.

“Ireland is unique in its dependence on schools in preparing for and celebrating the sacraments,” she said.

“Parishes are becoming more involved and there are some efforts to involve parents more. But in the survey, all express dissatisfaction that it is still largely a school event. Schools themselves feel that they are still working in a vacuum.

“All the voices in the survey are asking for more movement in the direction of parent and parish responsibility.

“All are saying that passing on the faith is primarily the responsibility of the home, with the support of the parish as well as the school.”

She said a big challenge will be how to “action” these findings.

“At the heart of what has to be figured out, the survey suggests, is how to relate to parents who are coming from different places.”

The survey, for example, highlights the contrasts between parents who are churchgoers, others who are not churchgoers but profess to have faith, along with others who see sacraments as family milestones with no faith dimension.

The survey did not explore the broader area of religious education and faith formation in schools.

Catholic schools are entitled to set aside up to 30 minutes of the school day for faith formation.

However, many teachers say preparation for Communion and Confirmation can take much longer.

Speaking to The Irish Times earlier this year, Archbishop Martin said the archdiocese has been working out how to place a greater emphasis on opting into the sacraments.

“For instance this year everybody who wanted to be confirmed had to write, make a formal application addressed to me, again to emphasise that Confirmation isn’t a school subject, it’s a faith subject.”

The “opt in” approach for sacramental preparation in multi-denominational schools has been operating for many years and typically involves faith formation classes outside regular school hours.

Chief executive of Educate Together Paul Rowe said up to 50 per cent of children who attend their schools self-identify as Catholic and attend faith formation classes outside schools hours.

He said the feedback he has received from clergy is that it is leading to greater engagement in the parish and stronger faith formation.

“We are not anti-religion by any means – we respect the identity of all children – and we facilitate groups of parents to bring in a catechist after school.”