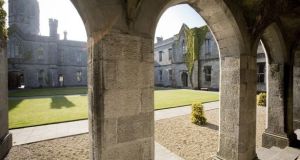 Opportunists who see the monetary value of the Irish language will do more to save it than experts engaged in a “discourse of despair,” an NUI Galway academic has said.

Opportunists who see the monetary value of the Irish language will do more to save it than experts engaged in a “discourse of despair,” an NUI Galway academic has said.

If people see advantages to Irish they will continue to use it, and an “eco-friendly” and creative approach will strengthen its future, said NUI Galway senior lecturer in Irish, Dr Lillis Ó Laoire.

Dr Ó Laoire, who was delivering Conradh na Gaeilge’s annual Léacht Uí­ Ghadhra in memory of writer and lecturer Dr Nollaig O Gadhra in Galway on Thursday, said that the sector needs to “continually reinvent itself”.

“Apathy is not allowed,” he said, drawing from the title of Seán Ó Ríordáin’s poem Ní­Ceadmhach Neamhshuim.

Latest census figures have recorded an 11.2 per cent drop in daily Irish speakers in Gaeltacht areas since 2011, with only 21.4 per cent of a total population of 96,090 in the native-speaking areas stating they spoke Irish on a daily basis.

However, Dr John Walsh of NUIG noted a far smaller decline, at slightly more than one per cent, in use among the two-thirds of daily speakers outside the education system and outside the Gaeltacht

There has also been an 0.8 per cent increase in the numbers of weekly speakers outside the education system.

Dr Ó Laoire drew parallels for the language with the threats to the planet from climate change, and said that O Riordáin’s poem was “ecologically oriented” and called for a heightened awareness of “creation and all life within it”.

“The coining of the term the ‘anthropocene’ and its increasing adoption points to the ways in which human beings are influencing the ecology of the planet in destructive ways,” he said, adding that he viewed the threat to the Irish language as closely related.

However, the language activism in his own home place in Donegal at the turn of the century allowed for practical approaches, he said. His great-great grandfather, Michael McFadden, who married into a family with Protestant links, was active in the Gaelic League. McFadden gave up teaching to run the family hotel in Gort-a-Choirce, and his bilingual advertisements – billing the hotel in Irish with essential practical information in English – attracted visitors who wanted to learn the language.

“I read his story as an example of an individual whose ideology regarding the language was based on what he considered its positive material advantages,” Dr Ó Laoire said.

“Balanced rather than reductive bilingualism is possible, if more supports can be provided,” Dr Ó Laoire said, and these could be made in “eco-friendly” ways that “characterise a growing strand in global development”.

“Investment in ecologically and culturally supportive initiatives can help to strengthen Irish-speaking communities and groups,” he said.

“TG4 is one example of a successful enterprise that has given communities a boost. Other such supports such as NUIG’s Acadamh na hOllscolaíochta Gaeilge provide additional infrastructural buttresses.

“The sector needs to continually reinvent itself and to prioritise creativity and initiative as part of a broad strategy of language planning for the future,” he said.