Teachers at Deansgrange school feel ‘betrayed’ over sale of pitches

Anger among parents as 7.5 acres of land at Clonkeen College is to be put up for sale 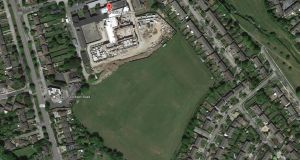 The Christian Brothers are planning to sell two-thirds of the sports pitches, 7.5 acres of land surrounding Clonkeen College in Blackrock, Dublin, to help fund its financial commitments to the State.

The decision by the Congregation of the Christian Brothers to sell eight acres of playing fields in a Dublin school has “betrayed” its teachers, the school’s principal told parents last night.

Clonkeen College in Deansgrange will lose most of its playing fields after the Christian Brothers-created trust announced plans to sell off two-thirds of the school’s sports pitches.

Speaking before nearly 500 people at an emergency meeting last night, the school’s principal, Mr Edward Melly that he is “still in shock” after he learned of the sell-off plan.

Assurances had been given by named Christian Brothers that the playing fields would remain with the school when the Brothers handed over responsibility for education to the Edmund Rice Schools Trust in 2008, he said.

But he said he and the board of management had been called to a meeting on May 3rd and told by the trust and the Christian Brothers congregation that the land has been sold to a house building firm .

He said he was told €10m had to be paid to the Minister for Education as part of the Christian Brothers’ redress payments for abuse of children who had been in their care. Unspecified amounts of money from the sale would go towards sustaining the ageing Brothers community and legal costs.

Mr Melly also said the Brothers told him the details of the deal were known “in full” by Minister for education Richard Bruton.

A number of speakers asked was the deal completed or subject to planning permission and chairman of the board of management Michael Blanchfield said they had been told it was “subject to contract and searches”.

The move has sparked controversy among teachers, parents and students at the school, which is due to grow significantly following a major building projects.

About 550 students currently attend Clonkeen College, whose numbers are set to grow to more than 600 with the school’s expansion.

It has a strong reputation for soccer and GAA and is set to lose the equivalent of two or more playing pitches, teachers say.

It is understood the congregation informed the school’s board of management recently that it proposes to allow the school to hold onto 3.5 acres of land.

It will also provide €1 million for the development of sports facilities required by the school, along with €300,000 to cover developments at the school.

It says there will be no change to the use of the land adjoining Clonkeen by the school until after summer 2018 at the earliest.

The Edmund Rice Schools Trust - a trust set up by the Christian Brothers in 2008 - confirmed in a statement it has been informed the Brothers plan to sell 7.5 acres of land to the rear of Clonkeen College.

It confirmed the Christian Brothers’ wider plans to start the process of transferring playing fields attached to schools nationally to the trust for use by children, young people and communities into the future, reported last weekend by The Irish Times.

Under this plan, half the proceeds from the future sale of any of these school lands - worth about €100 million - would go to the State.

With regard to the sale of land at Clonkeen College, the Edmund Rice Schools Trust said the decision to sell the sports fields had “ been taken solely by the Christian Brothers”.

It said the trust’s board of directors had always been clear that this decision was the responsibility of the congregation.

It said the trust did not own the land in question, and it was “was not Edmund Rice Schools Trust’s choice or decision to sell it”.

It said it “fully appreciates the importance of playing fields for schools” and would prefer that no school should lose its adjoining playing fields.

In the case of the school in question, the trust said it will continue its efforts to ensure that the congregation’s proposed sale impacts as little as possible on the school.

The trust said it understood that Minister for Education Richard Bruton was aware of both elements of the congregation’s proposals.

As part of the congregation’s sale, the trust’s office will also have to be demolished.

The congregation has a reserved right of way over this site and the trust said it cannot oppose it.

“ERST [Edmund Rice Schools Trust] has therefore agreed to dispose of its office building in conjunction with the congregation’s sale,” it said, in a statement.

“ERST is obliged to realise market value, at least, for the disposal of all assets, including the ERST offices. These proceeds will be used for the good of the 37,000 pupils attending its 95 schools.”

The sports fields have been held under a temporary five-year licence from the Christian Brothers.

The full area of land to be to be sold at Clonkeen is bordered by Meadow Vale, Monaloe Park Road and Clonkeen Road in Deansgrange.