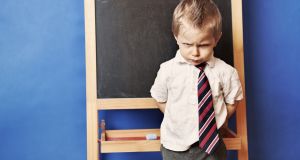 Research discovered over-controlling parenting at the age of two was associated with poorer emotional wellbeing by the time they were five. Photograph: iStock

Children with over-controlling parents are more likely to struggle at school and act up in the classroom, a study has found.

Researchers said so-called “helicopter parenting” could have a negative impact on a child’s emotional wellbeing, leaving them unable to cope in social situations.

While overbearing parents can mostly have good intentions, children who learn to handle challenging situations on their own will have more success later in life, the scientists said.

Lead author Nicole Perry, from the University of Minnesota, said: “Our research showed that children with helicopter parents may be less able to deal with the challenging demands of growing up, especially with navigating the complex school environment.

“Children who cannot regulate their emotions and behaviour effectively are more likely to act out in the classroom, to have a harder time making friends and to struggle in school.”

The study, published in the journal Developmental Psychology, involved 422 children and looked at how much mothers and fathers intervened in their toddler’s playtime at the age of two.

The youngsters’ development was then monitored over the course of eight years.

“Helicopter parenting behaviour we saw included parents constantly guiding their child by telling him or her what to play with, how to play with a toy, how to clean up after playtime and being too strict or demanding,” said Dr Perry.

“The kids reacted in a variety of ways. Some became defiant, others were apathetic and some showed frustration.”

The research discovered that over-controlling parenting at the age of two was associated with bad behaviour and poorer emotional wellbeing by the time they were five.

Meanwhile, those better able to regulate emotions at the age of five were more likely to have better social skills and be more productive at school by the age of 10, the study said.

“Children who developed the ability to effectively calm themselves during distressing situations and to conduct themselves appropriately had an easier time adjusting to the increasingly difficult demands of pre-adolescent school environments,” said Dr Perry.