Gender quotas for senior posts to be introduced at NUI Galway 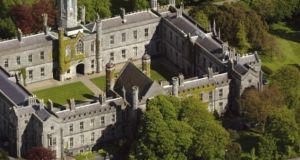 A taskforce report has made 24 recommendations aimed at promoting gender equality at NUI Galway.

Mandatory gender quotas will be introduced in NUI Galway to ensure more women are promoted to senior academic posts.

The move follows a decision by the university’s governing body on Tuesday to unanimously adopt the findings of a final report by a taskforce on gender equality.

The move could have significant implications for other colleges and public sector employers where women are under-represented.

Women hold just over half of all of the lecturer posts at NUI Galway. However, their numbers fall to 30 per cent at senior lecturer level and 10 per cent at associate professor level. Just 14 per cent are full professors.

A taskforce report, headed by Prof Jane Grimson, former vice-provost of Trinity College Dublin, has made 24 recommendations aimed at promoting gender equality at the college.

The quota of women to be promoted would be based on a “cascade approach” in which the number of women eligible for promotion is based on the proportion at the grade below.

Chair of the NUI Galway’s governing authority, former judge Catherine McGuinness, said she believed the move will shape the future approach to gender equality at NUI Galway and beyond.

“NUI Galway has done this and taken the lead on this issue and I am confident that these recommendations brought before the governing authority today will challenge the university to set standards that will be an example to the wider higher education sector and beyond.”

President of NUI Galway, Dr Jim Browne, said he looked forward to working with all staff, staff representatives and unions in addressing gender equality and becoming a leader in this space.

Dr Skeffington said recently that she welcomed the university’s decision to address the “appalling situation for women in the university by implementing mandatory quotas for promotion rounds and the suggested way to do it is excellent”.

However, she said the policy should be applied to all staff and not just academics and quotas needed to be applied from outside the university.

“If they do not do this, then I fear it will result in more outside appointments, mostly men, and so less promotions for internal staff,” she said.

She also said the college must address “injustices of the past” by promoting five women at the college who are taking legal actions over not being promoted.

The Irish Federation of University Teachers also welcomed the decision on Tuesday and called on the college to address other women affected.

Joan Donegan, the federation’s deputy general secretary, said: “The decision on quotas marks a first in terms of the public sector generally. It is regrettable that it has taken the college the best part of a decade to produce its first positive response on the glaring discrimination whereby only 14 per cent of full professorship grades are female.”