Fred Cooke: My Leaving Cert – ‘I told the examiner I spent £300 a week on sweets’ 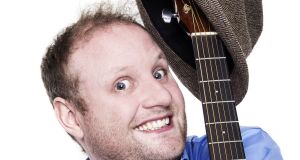 What is your most vivid Leaving Cert memory?

I remember sitting nervously in front of an examiner for my Irish oral. She asked me in Irish: “During the summer, how much money did you make a week?”

The only amount of money I could think of in Irish was £300. This came from a 1970s Irish Leaving Cert story where this man ended up in a wheelchair with £300 compensation.

“What do you spend 300 quid a week on?” she asked, surprised. With nervous panic, I replied, “Milseáin.”

My most vivid memory was sitting in silence for five seconds after telling my examiner that I spent £300 a week on sweets. She may have thought I was some sort of drug dealer.

Who was your most influential teacher and why?

After getting an A in music for my Junior Cert, I really wanted to take music for the Leaving Cert.

Unfortunately not enough students applied for it, but Mr Tackney went beyond the call of duty and decided to take us after school twice a week for a music class.

To this day, I still use what he taught about voice-leading and performing, even when on stage taking musical requests on melodicas.

I was always (and still am) blown away by his musical ability.

What was your most difficult subject and why?

Can you recall how many points you got in the Leaving?

The second time around I got 360 points. I don’t even know how much I got the first time – probably enough to just pass.

Spending five teenage years of your life in St Patrick’s College, Cavan, then moving to an all-girls convent, was a massive yet fantastic shock to the system. Even though it was an all-girls school, they let us take part in all the school events. Even sports day. Us guys did amazing at the tug of war. I was also blessed to have the incredible John Broderick as an English teacher and vice-principal.

Throughout his classes he had the intellectual comical phrasing of Woody Allen. He would deliver his knowledge at a rapid speed driven by his own enthusiasm. It’s hard to take in that such a brilliant mind has left us. His passing was a massive shock to everyone who knew him and he will forever be massively missed.