Students shy away from arts and head for job-ready engineering, science and construction 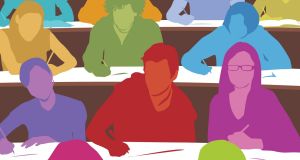 This morning more than 50,000 applicants will receive an offer from the CAO on behalf of the 44 institutions who provide their places on courses through this structure. Here’s are some of the big trends from this year’s figures.

1. Students fall out of love with the arts

A fall in applications for arts programmes this year is reflected in a decrease in points requirements across most courses.

Creative arts programmes have plummeted in some cases, while journalism courses are also down significantly.

The big talking point, however, is the impact of UCD’s changes to its traditional arts offering .

It has replaced its old arts degree with three new streams, which has had a mixed impact on points.

Last year, arts at UCD was 326 points. This year, there has been a sharp decline in the number of places from 1,280 to 350 on the course that most resembles the old three-year arts degree.

This has pushed points up to 381 – or 50 points more than last year. This is likely to exclude many who were sure of a place.

Many other traditional arts subjects have ended up in social science, a new four-year programme where points are at 392. This, also, is set to disappoint many would-be students.

Have your say: Was your Arts degree worth it?

By contrast, points for UCD’s new four-year BA humanities course stand at just 301, while points for its social policy (social work) degree are just 291, indicating that many are unsure what to make of the changes.

This may be good news for students, but will disappoint many academics and industry figures who have expressed concerns about a shortage of workers with a second language.

Students – who grew up during the economic downturn – are opting for courses where they can expect to walk into jobs.

In business – another area with strong projected job growth – points remains strong and steady. Teaching and nursing are also areas where there are skills shortages – so it’s no surprise that they are also in strong demand. Points are up for most primary and secondary teaching courses, even with additional places on offer this year.

Many nursing courses also see their points increase. UCD’s children and general nursing is up 10 to 477, while Trinity’s equivalent falls by 11 points to 473.

Industry, government and business have placed a huge focus on Stem (science, technology, engineering and maths) given projected skills gaps in these areas.

While demand is strong for engineering and many science courses, points have fallen for both physics and technology course, which may alarm many in the sector.

General science, for the most part, remains steady at UCD, UCC, NUI Galway and DIT. Trinity changed its offering this year, so it’s hard to compare year on year, though points here are high.

Degrees in physics-related courses, however, are down considerably in points requirement, despite a decrease in the numbers of places offered.

There has been a sharp decrease in points for computer science programmes across the country, even though industry figures say there is a critical skills shortage looming.

4. Medicine as competitive as ever

5. Colleges are adjusting their intake based on demand

Normally, you would expect points to drop where there is a decrease in application, and vice versa. However, colleges are responding to the change in the pattern of demand among applicants by increasing and decreasing the numbers of places on offer accordingly.

As a result, points for some courses may increase – even though demand is falling. This year, colleges reduced the number of places for business, ICT and journalism programmes. By contrast, there were extra places added to programmes such as biological and related sciences.