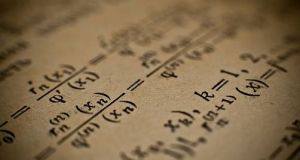 “There is very clear evidence from the State Examinations Commission that some students are taking a risk to get bonus points, and they are at the bottom end of maths standards.” Photograph: Getty Images

There are concerns over the basic skills of Leaving Cert maths students who are passing the higher-level paper but struggling to cope at third level, according to a university president.

Prof Brian MacCraith, president of Dublin City University, said it was time to re-examine the policy of awarding bonus points for the higher-level paper given the volume of difficulties facing students completing maths-intensive courses.

The number of students opting for the higher-level paper has doubled since 25 bonus points were introduced for the subject five years ago.

Some 16,295 students sat the higher-level maths paper this year – a record high – or 30 per cent of all exam candidates.

However, Prof MacCraith, who chairs an expert advisory group on education in science, technology, engineering and maths (Stem), said bonus points and recent reforms to the maths curriculum had proved a “blunt approach” to improving the standard of maths among school-leavers.

DCU, along with other higher education institutions, has doubled investment in recent years in catch-up maths classes for students who require additional support.

“There is very clear evidence from the State Examinations Commission that some students are taking a risk to get bonus points, and they are at the bottom end of maths standards.This may not be preparing them well for the future. I think it has maxed-out our ability to attract good quality students. It is a blunt instrument,” Prof MacCraith said.

“While bonus points was agreed by the CAO, the promotion of the idea at the time came from the [then] minister for education. It has some advantages, but I think it is clear that it is not going to continue improving things.”

He said the bonus points issue could be re-examined in the context of a wider review being carried out by universities as to whether bonus points should be applied to other subjects.

A taskforce of the Irish Universities Association is examining the potential of bonus points for other subjects related to the courses for which students apply. This is due to concern that bonus points for maths alone may be distorting subject choice among students.

For example, under the reforms being considered a student who studies French in the Leaving Cert and applies to study modern European languages at third-level could receive bonus points for the subject.

Meanwhile, a breakdown of results for the higher-level maths paper shows that of the 16,295 students who opted for the more challenging paper, the vast majority – 15,035 – were eligible for bonus points.

This places them at a significant advantage over other candidates in the hunt for CAO points.

A total of 1,016 scored between 30 and 39 per cent (a new H7 grade, previously categorised as a E grade or a fail). These students will receive CAO points, but are not eligible for bonus points. A further 344 students failed to secure the 30 per cent grade needed to pass the exam.

The State Examinations Commission found a significant minority of candidates were struggling to complete simple procedures.

“It is clear that the proportion of the candidature for whom this is a significant difficulty has increased since 2011, and that a significant minority of candidates now struggles to complete multistep procedures accurately,” the chief examiners’ report states.

The changes broadly coincide with the introduction of project maths, a reformed curriculum aimed at promoting a broader understanding of maths and increasing the numbers sitting the higher exam.