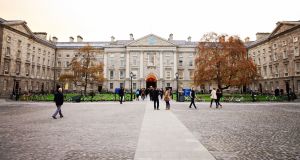 In a statement, a spokeswoman for Trinity College said the university “takes matters such as these very seriously and absolutely condemns such practices”.

Trinity College Dublin is investigating allegations that new members of its boat club were told to strip to their underwear and whipped with bamboo sticks as part of an initiation ceremony.

It has been claimed by current and former members of the Dublin University Boat Club that annual rituals designed to humiliate new members, or “novices”, have been taking place over a number of years.

The University Times has reported that the “Commons” tradition typically involves a three-course dinner, with a black-tie dress code, followed by a reception and “assignments” at an undisclosed location.

Attendees are reportedly asked to sign a form stating that they will keep the night’s assignments secret.

“Commons only works if people have no idea what it is about and what to expect,” according to an internal email from the boat club, reported by the newspaper.

“To that end, any photos or videos not [SIC]should end up on any form of social media or be in any way published or shown to those who have not attended.”

In recent years, some members said they were lined up, ordered to drink large volumes of alcohol and, in some case, told to strip to their underwear.

Some said they were whipped with canes or bamboo sticks and forced to sprint in their underwear before stopping and being told to drink cans of beer. The last person to finish their can of beer was told to drop and do press-ups.

Others told of being required to crawl through a dark, tunnel-line maze while being shouted at, kicked or hit with pillows.

A photograph of the boat club committee at the most recent event shows members holding canes and bamboo sticks on the steps of the university’s dining hall.

The boat club’s captain has rejected claims that any novice members were forced to strip to their underwear or consume alcohol, or subjected to whipping with bamboo sticks.

“Any indication or insinuation that any of these things happened at this year’s Christmas Commons Dinner is false,” he told the University Times, in an email.

In a statement, a spokeswoman for Trinity College said the university “takes matters such as these very seriously and absolutely condemns such practices”.

“We will be fully investigating the alleged incidents and would ask anybody who might have information that could help us with this inquiry to come forward,” she said.

“The information will be treated in absolute confidence and individuals will be supported fully in this process. Student counselling and other student supports will be made available for students affected by these reported incidents.”