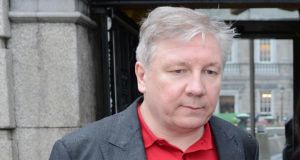 A group representing atheists has criticised a decision by a Dominican secondary school to cancel an invitation to address its final-year students on the basis that it would clash with its Catholic ethos.

Atheist Ireland chairman Michael Nugent was due to speak at St Dominic’s girl’s secondary school in Cabra on Thursday.

The original invite said: “The school wholly welcomes you and looks forward to hearing about both Atheist Ireland and atheism as a system of non-belief.”

But in an email received last week, Mr Nugent was told members of the school’s religious education team opted to cancel the invitation on the grounds that they did not “wish to cultivate non-religious belief ” at the school.

The message stated that a non-religious perspective “does not marry well with the school’s ethos/values” and did not fit with its senior cycle programme which “seeks to uphold and reflect a Catholic ethos”.

It added: “By extension, it does not wish to cultivate non-religious belief, in accordance with the school’s ethos. The school does however welcome children of all faiths and none, and recognises that non-religious belief is a perspective which some pupils may hold.”

In response to a query, the school’s principal Ann Donnelly said the school was reviewing the situation and was considering reissuing the invitation.

Mr Nugent said the school’s decision to cancel the invitation was at odds with its mission statement, which pledged to “teach the student to respect the backgrounds, traditions and beliefs of all those with whom she comes into contact”.

He said: “Clearly the school has the right to invite who it wishes. But after formally inviting me, it is now engaging in open religious prejudice and discrimination.”

The issue of religion and schools has been hotly-debated in light of controversy over admissions policies in denominational schools and religious tuition in the classroom.

Earlier this week, a State advisory body commenced a consultation process over a planned religious curriculum at primary schools, which will include a focus on secular beliefs as well as other faiths.

The original invitation also said that the concept of non-belief may be mostly new to much of the students, many of whom come from a faith background.

“As such, terms such as ‘rational’, ‘reason’ and other terms related to the secular experience may not be within their lexicon, and could require explanation,” the email added.