Could traditional subjects become a thing of the past in Irish schools? 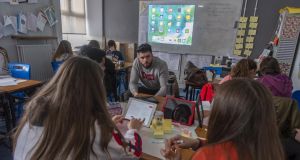 Pupils working on their projects at Educate Together Secondary School, Griffith College, Wellington Road, Cork. They have replaced subjects for a week by focusing on a phenomenon-based learning week. Photograph: Michael Mac Sweeney/Provision

Are secondary schools preparing students for life? Or are they just preparing them for the Leaving Cert points race and ignoring the kind of skills they will really need?

With a review of the Leaving Cert curriculum under way, it’s a question that comes up again and again.

A number of schools in Ireland – primarily those under Educate Together’s patronage – have decided to take a different approach to learning by temporarily ditching traditional subjects altogether and taking a “phenomenon-based learning” (PBL) approach.

Finland, which always scores highly in international league tables, has been rethinking how it teaches in the 21st century.

It manages to produce stellar results with children who don’t start formal schooling until the age of seven, have short school days, relatively little homework and no exams.

Since 2016, it has been teaching in a more collaborative way, allowing students to choose topics relevant to them and basing subjects around them. Pupils are encouraged to research using technology and other sources outside the classroom.

The aim of this approach to teaching – known as phenomenon or project-based learning (PBL) – is to equip children with skills necessary to flourish in the world we live in.

Luke McDonnell (14), is a student at the Educate Together secondary school in Cork, which has run several PBL weeks over the last few years. So, what’s it all about?

“The first time that we had a non-timetabled week, centred around a project rather than traditional subjects, we looked at the broad theme of ‘Atlantic’,” McDonnell explains.

“My group of five did a project on the Atlantic slave trade, delving into how European ships sailed down the west coast of Africa and stole people.

“We looked at literature from escaped slaves, we had art that was focused on slaves and the ships, we used maths to figure out how many people were taken and we touched briefly on the languages used by slaves and slavers. And of course, there was a significant geography element.”

For the school’s most recent PBL week, held at the end of February, students were asked to focus on one of the United Nations’ 17 sustainability goals.

McDonnell’s group opted to statistically analyse the links between corruption and happiness in Ireland.

The school took a structured approach to the latest projects. Monday was a “scaffolding day” where students learned about research methods, presentation skills, citation and plagiarism.

Tuesday involved forming groups and deciding on roles and topic refinement; Wednesday was all about students gathering data.

On Thursday they processed it and created a presentation; and on Friday, there was a project exhibition with judges.

Colm O’Connor, principal at Cork Educate Together, says the students and staff are learning a lot from this approach.

The school has dropped textbooks, using only iPads and a virtual learning environment called Schoology.

“My five years of experience in the European school system opened my eyes to the possibility of different learning and teaching models,” says O’Connor.

“This approach is mirrored by the philosophy underpinning the junior cycle reforms, but the retention of the terminal exams has undone much of the potential benefit.”

In preparing for this sea change, O’Connor wanted to be sure this would work, so he interviewed several Finnish teachers about how it works in their schools.

“I was struck by how we tend to separate into silos, and I think critical thinking is greatly enhanced when we see issues as connected and interdependent.”

Teachers are hired because they have a commitment to cross-curricular learning, says O’Connor.

“Our aim is to fully map the junior cycle curriculum and find links in both skills and content where possible.

“The students are generally excited by the weeks, as they have some control over what they research and can be very creative.

McDonnell says he particularly enjoyed a PBL week with the theme of “belief without knowledge”, where he and his team focused on the supernatural and why people believe in things that they have no evidence for.

“Misinformation is abundant online. People believe in cryptozoology [a pseudoscience suggesting that animals such as Bigfoot, the Loch Ness Monster or big cats in Ireland or the UK are real] without any proof.”

Reflective learning is a key part of the students’ work. “We keep a reflective journal where we write about what we have done and how we could do it better. For this project, I wrote in my journal that we could have gone into greater depth, linked with other subjects and talked less abstractly.”

For O’Connor, the learning journals are critical.

“We are learning as we go along. Teachers and students have to experiment, make mistakes and learn. If we as teachers don’t do this, and name it, then how can the students?”

Is there any plausible way of delivering the entire curriculum in this way, or is it best kept confined to a few weeks of the academic year?

“I don’t know, to be honest,” says O’Connor. “I do believe that our senior cycle curriculum hinders the development of critical thinking skills, as there’s a strong focus on the ‘right answers’ and the memorising of huge quantities of data, rather than on the connections between subject areas and a problem-solving approach – insights which look increasingly necessary for students.”

Is “phenomenon-based learning” the way forward? Two experts give their views

But how feasible is it, and what are the potential benefits and drawbacks?

Dr Stephen O’Brien, a lecturer in education at UCC, says that this is an innovative and collaborative approach.

“It directly challenges ‘silo subject’ thinking and practice, mundane forms of traditional teaching and learning approaches, and taken-for-granted power positions in the classroom.

“It paces learners at the heart of its critical moral, intellectual and social purpose. In these neoliberal times where learning is ever-more commodified, PBL offers another way for students and teachers to collaborate, create and critique together.”

However, Prof Michael O’Leary, director of the centre for assessment research policy and practice at DCU’s institute of education, strikes a more cautious note.

“This isn’t a new idea: phenomenon-based learning, involving trial and error in a non-compartmentalised way, is how humans learned before formalised education.”

The jury is out on whether PBL suits all children, O’Leary says.

“A lot depends on ensuring that the students and teachers know what their learning goals are and what they’re striving towards.

“It is likely that some students will love it, some will be okay with it and some might even struggle with it.

Could it work as a basis for a brand new curriculum?

“It’s a big gamble and I don’t know of anywhere it has been successfully tried on a large scale,” he says.

“The reality is that it makes many demands on teachers and learners and I’m not sure we know enough about it right now to replace traditional subjects entirely.”