Playoff semi-final against Slovakia provisionally set for start of June 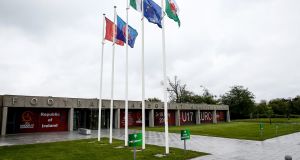 The FAI has welcomed the decision taken by Uefa to postpone the European Championships by a year. The tournament will now run from June 11th until July 11th in 2021. Tickets for games, including those sold to the corporate and hospitality sectors, will be valid next year but full refunds will be made available to those who wish to get their money back.

The intention is to clear the way for domestic club competitions across Europe, as well as the Champions and Europa Leagues, to be completed. Whether that can be achieved remains to be seen and a working group has been set up by the federation in order to look into the detail of possible solutions.

In the meantime, the Euro2020 playoff semi-finals, including Ireland’s in Slovakia, and finals, have been provisionally put back to the international window at the start of June.

A decision on whether they can actually proceed then will be taken closer to the time. If they cannot then there is unlikely to be any international friendly games as these have been suspended for the foreseeable future.

The women’s European Championships and men’s Under-21 Championships are both set to be moved back from 2021 to 2022, although confirmation of this is not expected until the summer. The Copa America has been postponed from this year and Fifa has, Uefa says, indicated it will do whatever is necessary in terms of the expanded World Club Championship due to be held in China next year, to make a new calendar work. The availability of players for all of the rescheduled tournaments has, it is said, been secured.

“We think that postponing the Euros is the only way to give a chance for all of the club competitions to be finished,” said Uefa president Aleksander Ceferin after the decision had been formally announced. That is not sure for now but we need to think about the health of the fans and players and about football as a whole.”

There had, he said, been “100 per cent support” from all 55 member associations as well representatives of other stakeholders, including leagues, clubs and players.

The clarity provided on Euro2020 will come as some relief to the FAI, although the situation is an awkward one for the association here, not least because Mick McCarthy is due to finish his second spell as manager of the international team at the end of July, with Stephen Kenny set to take charge on August 1st.

It is understood that McCarthy’s contract is tied to that date and not dependent on the conclusion of the European Championships, although it remains to be seen whether an attempt might be made to reach some sort of accommodation to have him in charge for the tournament in the event that the team was successful in the playoffs. It seems unlikely that such an arrangement could be made to work.

The association, in any case, welcomes the announcements made.

“Uefa has made the right decision today in the interests of the health and well-being of football players, fans and staff alike,” said FAI interim CEO Gary Owens after participating in a conference call along with the association’s president, Gerry McAnaney.

“We support this decision and we look forward to working with all our stakeholders on reorganising Uefa Euro 2021 for Dublin next year. We would like to thank all our partners – the Government, Dublin City Council, Aviva Stadium and all the agencies and partners who have worked really well with us for the last few years.

“We have agreed with these partners that we will now begin to plan together for the four games here next year, which will be the centenary year of the FAI.”