Dr Brendan Murphy due to reach 65, but institute wants him to stay in office until 2019 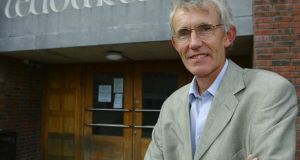 Cork Institute of Technology president Dr Brendan Murphy: reappointed in 2014 for a five-year contract. The institute is in discussions with the Department of Education and Skills to allow him to remain in office. Photograph: Neil Danton/News Digital

The statutory retirement age for members of the public service is generally 65 years of age. However, the CIT board is seeking permission for Dr Brendan Murphy to remain in office for up to three more years.

He was first appointed to the position – which has a salary of about €146,000 – in September 2004. In advance of the completion of his 10-year term of office in 2014, CIT’s governing body ran a recruitment competition for the position of president for a five-year period.

Dr Murphy was reappointed and began his new contract in 2014. While he is due to reach 65 later this summer, the contract would see him continuing in office until 2019.

Department of Education and Skills

A spokeswoman said there were no additional pension or other costs associated with his appointment.

CIT is understood to have argued that Dr Murphy is legally entitled to service beyond normal retirement on contract and age-discrimination grounds.

The college is keen for Dr Murphy to continue as president at a time when it is seeking to secure technological university status. One source said it was likely a compromise solution may involve the president serving for a shorter period than CIT is seeking.

Separately, the University of Limerick is understood to have resisted calls for an independent investigation into a series of allegations relating to financial irregularities and human resources practices.

A series of allegations is understood to relate to former staff members and students.

Some of those who have made allegations plan to protest outside the university later this week at what they say is “inaction” on the part of the colleges in dealing with allegations.