‘Childcare is a huge issue for parents going to college’

A growing number of third-level students have dependent children. But affordable on-campus childcare and other supports are hard to find 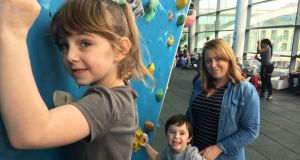 For parents, sending children off to college for the first time can be a time of quiet anxiety. But what if you’re a mature student with young kids of your own?

Worries about exams or social life quickly fade into the background when you’re battling to find affordable childcare or desperately searching for someone to mind the kids during the school midterm break.

It’s a dilemma Carly Bailey, a mother of two who is studying law and political science at Trinity College Dublin, is all too familiar with.

She and her husband lost their jobs and their home during the economic crash. Both decided to go to college in recent years to help boost their family’s employment prospects, but ended up vaulting a series of obstacles in the process.

“There’s no getting around it, but childcare is a huge issue for parents going to college,” says Bailey. “Student parents are usually struggling financially and are often reliant on the back-to-education grant or medical cards. At least some colleges like Trinity have supports available, but they’re only available up to age five.”

For example, her partner, who recently graduated, spends much of his time caring for their children, especially their boy, who has special needs.

“A lot of people end up using grandparents or family . . . While there is financial support available, it’s only for registered childminders or creches,” Bailey says.

There are no official figures available on the proportion of third-level students with dependent children, but there are indications that the numbers are growing fast.

After rent, utilities and transport, childcare was the fourth-largest category of expenditure for the Student Assistance Fund, an emergency source of funding available to colleges.

“What we mean when we say ‘student’ has changed now,” says Annie Hoey, president of the Union of Students in Ireland. “Students are no longer 18 and straight out of the Leaving Cert. There’s a wide variety of ages and backgrounds.”

But supports for student parents in many colleges are either patchy or non-existent across higher education institutions. While some offer parent support groups and strong representation within student unions, others provide little or no assistance for students with children, or those who become pregnant during their time at college.

Some institutions, including Trinity College Dublin and Dublin Institute of Technology, offer funding programmes for childcare costs. Others, such as University College Cork, offer subsidised creche care, but it is often limited to under-fives, leaving parents with major challenges when their youngsters go to school.

“Some of the efforts that student parents go to to attend lectures, study and take examinations, while parenting and sometimes working part-time, are breathtaking,” she says.

Observing this prompted her to set up a student parents’ network on campus, the idea being that the successes of these students might inspire or encourage others who are parents and thinking of becoming students.

“It is a simple affair involving connecting current, incoming and prospective student parents,” MacDonald says. “It is merely a presence to connect and to demonstrate what student parents describe to me as ‘the impossible’, and at the same time have made possible.”

A similar service at Mary Immaculate College in Co Limerick has also given many students the practical and emotional support to continue.

A frustration, says MacDonald, is that simple and inexpensive supports, which can make a huge difference to parents under pressure, are for the most part unavailable to students.

“Services such as homework clubs for their children, which could give student parents a handful of hours of uninterrupted study per week, would not be overly expensive to run but are not generally available. Opportunities may be missed because of the lack of such little supports,” she says.

A recent sports camp for children of student parents at Trinity College Dublin is an example of what can be achieved with minimal investment. During the recent midterm break, children got to take part in various activities, including trampolining, rock-climbing and swimming, which allowed student parents to attend lectures and study as normal.

Carly Bailey, who helped organise the project, says it was funded through a €1,000 grant and other funds from Trinity’s access programme. For this modest sum, 13 parents and their 20 children benefited.

“Many student parents, particularly lone parents, are faced with little choice but to take up to a week off to care for their children,” she says. “It means missing vital lectures, tutorials and study time, simply because they are unable to pay the increased cost of childcare during this time.”

Linda Stapleton, a fourth-year student parent, says simple supports, such as a midterm sports camp, can be the difference between dropping out and sticking with a course. “I think it’s a great initiative as my degree is a professional one where attendance is mandatory, so this makes a huge difference in being able to attend lectures whilst having childcare, easing the juggling mature student parents have.”

Erica Fleming, another student parent, said it also eased the financial pressure many faced during midterm.

“Trying to get childcare during the midterm break is extremely difficult and unaffordable for many students with young children,” she says.

“Midterm breaks are a huge obstacle. It’s difficult to to afford the extra cost and find somewhere all four are happy,” she says. “This has been invaluable for my attending lectures this week, which I may not have been able to make had I not been awarded a place on this scheme.”

Annie Hoey says colleges can and should do more to support student parents, especially at a time when public policies are aimed at increasing the numbers of third-level students from under-represented backgrounds.

“Institutes should recognise the diversity of the student body and should be supportive to all types of students,” Hoey says. “That means supportive of parents and facilitating their ability to participate in student life in the same way they would support people of different backgrounds.”