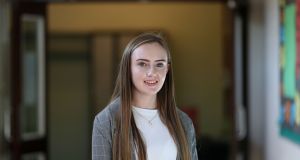 The postcode lottery has long determined a student’s prospects of going to college. We know that 100 per cent of students in some Dublin schools, particularly around the most affluent parts of the southside, have higher third-level progression rates than disadvantaged areas of the city where as few as 22 per cent go to college.

This year, however, calculated grades – a response to the cancellation of this year’s Leaving Cert as a result of Covid-19 – may have upended a system that has benefited the middle classes for generations. And it is causing no shortage of ructions.

Coding and communication errors in the calculated grades process saw almost 8,000 students receive higher grades than they should have, while more than 6,000 students were marked down.

Trish McGrath is principal of Hewitt College, a fee-paying “grinds” school in Cork where some students are disappointed this year.

She says teachers were reluctant to sign up to calculated grades but agreed after negotiations where the Department of Education said school data would be combined with historic school results data to generate the student’s grade.

Following a public outcry in the UK which saw more affluent students do better and disadvantaged students suffer under the calculated grades system, the Irish Government decided to remove school profiling and standardisation.

McGrath says this had adverse effects on a large cohort of students, both in public and private educational settings.

“The new algorithm penalised students who believed in the education system, who believed that if they worked hard, they would achieve their goals… The issue was the poor manner in which the entire process was handled by the department,” she says.

The Irish Times was contacted by several students and parents from a range of high-achieving schools – although most were fee-paying – who complained about being marked down. In one case, a student was marked down in seven subjects, resulting in five downgrades and her seventh CAO choice.

An analysis of the calculated grades shows that 14 per cent of students were downgraded in Deis – or disadvantaged – schools, compared with 17 per cent in other schools.

This year, the grades awarded by teachers in Deis schools rose by nine points compared with seven points in other schools and by 9.5 points in grind schools, which may account for why the algorithm appears to have had an impact on schools like Hewitt College and Dublin’s Institute of Education.

Educators and campaigners say the Irish and UK educational systems have always enhanced privilege and rewarded poverty and that the current controversy is holding a mirror to that reality.

Michelle O’Kelly is principal and a former student of Mercy Secondary School, Inchicore, an all-girls Deis school in Dublin 8 which promotes a college-going culture from first year onwards.

“There is no denying that due to some socioeconomic issues that our community experiences, our students’ pathway to college is not as smooth as it may be for other young people,” O’Kelly says.

“This year, 68 per cent of our Leaving Cert class applied for third level and 100 per cent of them secured one of their top three choices, while 69 per cent were marked down. This year’s system was absolutely fair… why should the past performance of a school predict a young person’s future? Using Junior Cycle results as a predictor of performance was more equitable than using the school’s historical data.

There are always people who feel let down by the system every year and either don’t raise it because they feel that their concerns won’t be considered, explored or validated

“The bigger question is whether the Leaving Certificate is a fair way of assessing our young people in any given year. There are always inequities there and it is students from disadvantaged backgrounds who feel this when the CAO offers come out.”

Cliona Hannon, director of the Trinity Access Programme, says the idea of the Leaving Cert as a fair and impartial system suggests we have a “collective Stockholm syndrome” that ties us to an outdated model.

“We shove all young people into classrooms where teachers are forced to teach to a test, which has a negative effect on both learning and the profession,” she says.

“I feel huge sympathy for this year’s Leaving Cert students, who showed resilience in the face of extraordinary adversity. And two of my four children have gone through the Leaving Cert, so I know what a Herculean task it is for families.

Education is alchemy. There are few ways of getting out of consistent poverty apart from education

“But there are always people who feel let down by the system every year and either don’t raise it because they feel that their concerns won’t be considered, explored or validated. There are families where education is limited; there may be health issues and young people may have caring responsibilities; there may be huge financial stress and the students may need to work part-time. In high-performing schools, there may be ski holidays and musicals and it is assumed that everyone will go to college.”

Analysing 20 years of data, Hannon says, students from disadvantaged schools perform just as well in third-level as students from fee-paying schools; the hurdle is securing a college place to begin with.

“Education is alchemy. There are few ways of getting out of consistent poverty apart from education. It would be a tragedy if we revert to the previous system,” she says.

‘I was shocked by my results... I missed out on medicine’
Oskar Davenne, Hewitt College, Cork
“I’ve wanted to be a doctor since I was seven. I knew it wouldn’t be easy and I studied hard. After the Junior Cert, Mum offered to send me to a fee-paying school, so I went to Hewitt because it gets good grades.

“I was nervous about predicted grades as I didn’t know what it meant, whereas I knew what the Leaving Cert entailed.

I’m not the only person from my school who is disappointed, everyone seems to be downgraded

“I was shocked by my results. Biology is my best subject and I had always gotten marks in the high 90s, so I thought this was a lock for a H1. I was confused when I saw a H2. My standard in French is H2 but I got a H3, and my H3 in maths was low. I knew then I was unlikely to get my course. I was disappointed again when I didn’t get any upgrade after the review.

“I’m 17, almost 18, so I could always repeat. Going abroad isn’t a financial option. I’m unsure what to do right now. I’m not the only person from my school who is disappointed, everyone seems to be downgraded.

“I’m glad that less-advantaged students did well, and it’s not about us versus them, but we feel there’s no reasoning given and that teachers know our marks better than a Government computer programme.”

‘I’ve worked really hard to get to college... I’ve got a place in international business and Spanish at DCU’
Aoife Fleming, Mercy College, Inchicore
“I loved going to school and knew what college course I wanted. When Covid-19 hit, I was happy I wouldn’t have to sit the exam during a pandemic but also nervous about the calculated grades process and standardisation, which meant we’d be up against fee-paying schools where over 90 per cent of the students go to college and we’d be marked down against them.

I do understand where the other students are coming from, but I’ve worked really hard to get to college, as have many of my classmates

“In a fee-paying school, you benefit from the reputation and the networks, and it’s likely your parents can afford grinds. I was lucky enough to get grinds in Trinity for maths [through a programme that supports students from Deis schools].

“I do understand where the other students are coming from, but I’ve worked really hard to get to college, as have many of my classmates who were up against significant obstacles. Our results did not come from nothing; they reflect the amount of work we put in.”