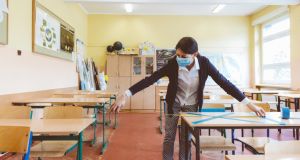 The INTO described it as “incomprehensible” that primary schools would remain fully open when infection levels are high enough to rule out indoor gatherings. Photograph: iStock

Teachers are to demand clarity on what additional protective measures can be put in place in schools should Covid-19 restrictions escalate to Level 4 or 5.

The Teachers Union of Ireland (TUI) said on Monday afternoon that even if the Government only imposed a blanket Level 3 status across the country, uncertainty and concern remains in the school system.

“We are not terribly reassured by that,” Martin Marjoram, TUI president said of indications the increase in restrictions would not reach Level 5 as had been recommended by public health officials.

Although that position still had to be confirmed, Mr Marjoram said it would mean “no real change” for schools but “that is a concern in itself because it means that while more and more restrictions are coming into place in society, nothing changes in schools”.

The TUI and other teaching unions had come out on Monday morning calling for safety reviews and clarity on precautionary measures that would allow schools to remain open, particularly in the event of a Level 4 or 5 escalation.

Mr Marjoram said that on Monday his email inbox had “lit up” following reports of a Level 5 NPHET recommendation.

“They were messages from people who were frustrated...very concerned that schools seemed at that point just about to be treated very differently to other work places [that would be forced to close]. Some were really angry,” he said.

As it began to emerge that Level 3 was a more likely outcome of Monday’s talks between NPHET and Government, Kieran Christie of the Association of Secondary Teachers Ireland (ASTI) said the organisation would continue to monitor the situation.

“While we are committed to keeping schools open, our overriding objective is to ensure the safety of the entire school community,” he said.

Earlier the teaching unions had raised questions about the prospect of schools remaining open during Level 5 restrictions and called for safety reviews.

Notably, the Irish National Teachers Organisation (INTO) described it as “incomprehensible” that primary schools would remain fully open when infection levels are high enough to rule out indoor gatherings.

It called for an immediate public health review on the status of schools at Level 5 and wrote to Minister for Education Norma Foley demanding an urgent meeting.

General secretary John Boyle told the Minister that “to date at stakeholder consultations we have received no clarification on what protective measures would apply in primary and special schools at [the first] four different levels.”

Mr Boyle noted that Level 5 recommendations for schools and crèches are to be based on the precise situation at the time.

“The evidence to date is that by the end of the first month of the school year 187 schools had testing completed as a consequence of public health risk assessment and that there were 59 confirmed cases in primary and special schools,” he said.

The INTO has said clarity is required on available safety measures at both Level 4 and Level 5 of the plan.

“In our view it is incomprehensible that our schools, which have the largest class sizes in Europe, would remain fully open at a time where infection levels were so high in the community that no indoor gatherings or events were permissible,” Mr Boyle said.

“It is not acceptable that teachers appear to be placed at greater risk of infection compared with citizens and workers generally.”

In a statement on Monday morning, ASTI president Ann Piggott said teachers are concerned by the implications of Level 5 restrictions and that should they be implemented a “comprehensive review of the medical and related guidance being implemented in schools” should be undertaken immediately to see if it is safe for schools to remain open.

“We are writing to the Minister for Education and Skills this morning to request that she initiate a review immediately,” Ms Piggott said. “We will also be requesting that the second-level stakeholders meet to discuss all associated issues.

“The health, safety and welfare of all members of our school communities is of paramount importance”

“We have already sought detailed clarification on the why it would be safe for schools to remain open at Level 5 if the rest of society is effectively locked down,” he said.

“We have a number of justified and important questions in this regard and these must be addressed as a matter of urgency.”

The TUI has pointed out that many of its members either have serious health conditions or live with people who do. It has also called for more clarity on what Level 4 restrictions would mean for schools in terms of additional protective measures.

Siptu education sector organiser Karl Byrne said on foot of the concerns raised by NPHET regarding Covid-19 and outbreaks being experienced in third level institutions in other countries, the Government should “make a clear decision concerning the sector that will bring us up to the Christmas break”.

He said the current uncertainty and shifting approaches were “damaging to third level workers and students”.

“The Siptu education sector is therefore calling for the continuation of online teaching and learning until the Christmas break. We contend this will relieve excessive stress levels on both staff and students and provide much needed clarity for the sector.

“We also believe this approach is in the best interests of the wider fight against the spread of Covid-19 in the community.

“Our members in the sector have endured an extremely tense summer preparing for the current academic year. The constant uncertainty around the application of public health advice has exacerbated their many genuine concerns.

“We can no longer just deal with this in two- to three-week blocks. What is required is a medium to long term plan for the sector.”