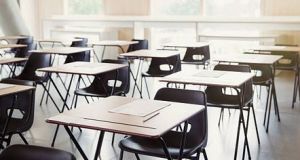 A grassroots move within the Association of Secondary Teachers, Ireland (ASTI) to suspend its campaign of industrial action will announce this week that it has secured enough support to trigger a special convention of the union.

The union’s leadership was at the centre of criticism from some members during its annual convention last month, with one member describing its as the “North Korea of the trade union movement”.

ASTI is the only public sector union to reject the Lansdowne Road agreement, which has triggered financial losses for members and delayed access to contracts for new entrants to teaching.

A number of members have begun gathering signatures from teachers in a bid to debate a motion to suspend the union’s industrial action and restore losses and contracts to teachers.

An attempt to have this motion debated at last month’s convention was voted down narrowly. However, under the union’s rules a total of 800 members’ signatures can trigger a special convention within a six-week period.

The move has sparked a critical response from ASTI president Ed Byrne, who said the petition had not been approved by officers of the union, and the fact it had not been sent to all members “calls into question its democratic nature”.

He said the membership had voted this year to reject settlement proposals drafted late last year relating to pay and the union’s opposition to junior cycle reform .

Mr Byrne has urged members to “respect the mandate” of the ballot, and says a move to revisit the vote could have implications for any future ballots.

However, Noel Buckley, a Tipperary-based teacher, said the last vote was carried by a margin of just 5 per cent, or 700 votes, which controversially included retired members.

In the meantime, he said members have had their pay frozen, while many new entrant teachers are missing out on permanent contracts.

Mr Buckley said members were increasingly disillusioned at the union’s strategy. “We will have over 800 signatures in our hand by the middle of this week and will lodge them with the president. I believe many more will add their signatures in the weeks following as they become aware of our petition.”

The issues are likely to be discussed by ASTI’s standing committee and 180-member central executive committees, which are due to meet later this week.

Mr Buckley also expressed concern that the loss of members could have long-term consequences for the union.

“ I feel if we do not take action we will see the ASTI greatly weakened, and voluntary secondary schools will become de-unionised or the TUI [Teachers’ Union of Ireland] will gain a significant foothold.”

Mr Byrne has said claims in some quarters that the union was “ haemorrhaging” members nationally were overstated.

While there were also claims last year that the union was losing members, he said official figures released last December showed that its membership had risen above 18,000.