Arts degrees: Can universities save them? 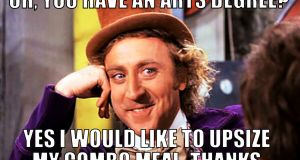 Jibes about arts degrees and low-paying jobs provide plenty of material for meme makers online. Many colleges are now reforming their courses to place a greater focus on boosting graduates’ employability

They’ve always been an easy target. And nowadays, jibes about arts degrees and low-paying jobs provide plenty of material for meme-makers online.

“Oh, you have an arts degree?” says a self-satisifed Willy Wonka in one . “Yes, I would like to upsize my combo meals, thanks.”

The stereotype may not be new or accurate, but what has been alarming universities in recent years is a downward trend in numbers taking on the degree over the past decade.

While points have shot up for many, Stem – science, technology, engineering and maths – courses, points for arts courses have fallen sharply.

Studies on the outcomes for graduates haven’t helped: arts graduates are more likely to earn least after college and most likely to feel their degree is irrelevant to their work.

Colleges are now seeking to turn these trends around with revamped arts offerings and a greater focus on boosting graduates’ employability.

From 2018, UCD, which runs the biggest arts course in Ireland, will introduce a four-year arts degree programme which will include work experience and overseas study. However, the old three-year BA arts degree will also remain in place.

Maynooth, DCU, UCC and UL have also made sweeping changes to their humanities programmes in recent times, while Trinity College is engaged in a comprehensive review of its arts degree.

Despite a slight rise in CAO points for some arts courses this year, the overall trend for the past 10 years or so has been clear: students have been gravitating towards science-based courses. The bulk of research funding has followed.

Humanities academics in subjects like history, English and politics have had to shout louder to be heard.

But Prof Sarah Prescott, the recently appointed principal of UCD’s college of arts and humanities, says arts degrees have economic, social and cultural value. Her own background is in English literature.

“It has been seen as problematic that arts and humanities are not directly vocational,” she says.

“The tide is turning. I have been talking to employers about the internships that will be part of the new BA, and they say that arts graduates have flexibility, creative and critical thinking skills, empathy, strong linguistic abilities and innovative, research-based approaches to problem solving.” (Indeed, graduate recruiters are as likely to take on those with arts degrees as they are those from other disciplines.)

The changes at UCD, brought about in response to a major curriculum review, are the most dramatic since the university introduced a modular system in 2005 which allowed students to take courses outside of their core discipline. This review focused on making its courses “future-proof” in a changing world where familiar jobs are threatened by increasing automation and where today’s graduates may be working in roles that don’t yet exist.

Beginning from 2020, students on the four-year programme will be apple to apply for a work placement internship. UCD is securing a range of partners for these, in areas including banking and finance, media and publishing, heritage and arts, the civil service, NGOs and the corporate world.

Students are not expected to be paid for their work. UCD defends this, saying that the internships will be highly structured with students expected to reflect on their learning, and they can also be offered close to the student’s home.

“It is part of a well-designed module, where students will go through an application process and learn how to apply for a job,” says Prescott.

“We want to get students to think about what skills they are learning and to remove the disjoint between being an intellectual and being a professional,” says Prescott. “And we want them to do that while we are here.”

The overseas element, meanwhile, will give students the chance to study for a semester in a partner university, gaining experience of other cultures and, in some cases, improving their language skills.

Finally, the additional year is expected to require students to complete a major research project.

UCD will have three entry routes to arts. Alongside the existing system, there will be a BA in modern languages and a new BA humanities where students will choose a pathway after first year: these include music, drama and film; English with creative writing; and Celtic studies, art history and history.

For all this, Prescott suggests that the humanities have a timeless worth outside of labour market trends.

“These subjects have an intrinsic value, and we need to clearly articulate this. There is a worth in a student learning about history or English simply because they want to.”

Maynooth University has shaken arts up, too. This year, it began allowing students to study arts and science subjects together by offering a number of topic-based modules such computational change which combines maths and philosophy.

Students can also study a module in climate change which combines geography and biology, and more of these courses will be rolled out in the coming years.

The university is also considering extending the degree from three to four years to allow for overseas and work placements as well as a research project.

Prof Colin Graham is the head of English at Maynooth University. He says that the perception of irrelevance needs to be met with a robust response: that arts degree are valuable for the workplace because of their writing, research and critical skills, as well as a sense of ethics and ethical thinking.”

Ethical thinking is all well and good, but many students – and their parents – look at earnings in other sectors and vote with their feet.

Although employer bodies such as IBEC say that while arts graduates may not earn as much in the early stages of their career, this does rise significantly within five years.

“Some are put off by money and some are not,” says Graham. “We see students studying the subjects they love now and thinking about their career later. They know that arts is not their final destination.”

‘My arts degree had made me more versatile and more employable.’

“My bachelor of arts included elements of arts and law. In the move from secondary school to college, we had to be more self-motivated to learn and we had to engage with and analyse what we were studying.

“In college, the timetable was much lighter which meant we had to drive our own learning and I came to understand that there isn’t always a right answer.

“I wanted to have the element of an arts education because it’s not enough to just cover the core legal modules. I felt that having a language would make me more versatile, setting me apart and making me more employable.

“I got very involved in the social side of college, especially the debating and French societies, and I also did some voluntary work with Oxfam and Amnesty as well as working part time.

“My degree took me to Belgium for a year. I had been used to living at home so, in those first few weeks, I was a miserable and scared, but it turned out to be one of the best opportunities I had ever had. There’s nothing like living in a country for a year to improve your language skills.

“I finished my master’s in international relations at Notre Dame earlier this year. There’s been some internship work with a local solicitor and am now starting taking up a position with the Irish mission to the United Nations in Geneva. Arts has definitely opened doors for me.”

62% – average employment rate for all graduates

29% – arts who feel degree is very relevant to their work

62% – proportion of all graduates who feel their degree is relevant

Source: What Do Graduates Do? The Class of 2015. ( Higher Education Authority)

Arts adjustments: How some colleges are revamping their degree offerings:

DCU – BA students can turn their three-years arts degree into a BA International by spending a year at a partner university. New arts subjects include media studies and translation studies.

NUI Galway – It has launched seven new arts degrees for enrolment in 2018 with new offerings include music, film and digital studies, arts and technology, international and global languages. This follows feedback from students, industry and employers.

* This article was amended to include a correction