Age of digital consent to remain at 13-years-old 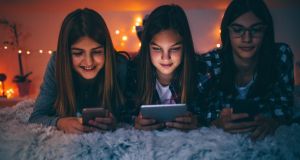 Children’s groups have argued to maintain the age of digital consent at 13. File photograph: Getty Images

Proposals to raise the digital age of consent from 13 to 16 years of age were rejected by an Oireachtas committee on Wednesday.

The digital age of consent is the age below which a person cannot by law make an agreement with an online service provider.

At a meeting of the Oireachtas justice committee, Fianna Fáil sought to raise the age of digital consent through an amendment to data protection legislation.

The party’s justice spokesman Jim O’Callaghan said 13 was “too young” and meant young people were vulnerable to being exploited.

“We must recognise now that children are growing up with levels of intrusion that we didn’t experience,” he said.

Mr O’Callaghan noted that a child could not legally enter a contract until aged 18.

Social media, he said, merged people into groups and was a threat to individualism and “is anti-intellectual in the long run”.

He was supported by Labour TD Sean Sherlock who said by making 16 the age limit, the onus was being pushed back on to the social media companies.

However, he added that he would go against the recommendation of the Ombudsman for Children and groups such as Barnardos “with trepidation”.

Children’s groups have argued to maintain the age of digital consent at 13 on the basis that young people’s rights must be valued and raising the age could potentially undermine child protection measures and result in some services potentially being withdrawn.

Independent TDs Mick Wallace and Clare Daly argued strongly for 13, citing a wide range of expert opinion behind that threshold, including the Children’s Rights Alliance.

Both said that education was the best protection for children and not a “nanny state”.

Colm Brophy of Fine Gael said the committee had previously brought in experts and made a judgment.

It was regrettable that the age issue was being revisited, he said. Having listened to all, he was “firmly of the opinion” that 13 was the correct age.

Róisín Shortall of the Social Democrats argued passionately for a ban on marketing companies targeting children, irrespective of the age of consent.

She said it should be illegal to harvest personal data for marketing and commercial purposes.

There was “relentless targeting of children”, she said. “Our children have a right to be allowed live their childhood without being targeted.”

Minister for Justice Charlie Flanagan said the Government opted for 13 as an “appropriate balance” having listened to all experts. Denmark, Sweden, Finland, the UK, Spain and Latvia thought the same, he said.

His experience as a parent was of seeing 13- and 14-year-olds being very tech savvy and able to circumvent their parents. A digital age of 16 “would be really difficult to monitor and enforce”, said Mr Flanagan.

The committee’s decision to reject the proposal was welcomed by groups such as the Children’s Rights Alliance, ISPCC and other leading children’s organisations

“Children’s individual rights must be valued, and raising the age of consent to 16 will potentially undermine child protection measures and result in some services potentially being withdrawn,” said alliance chief executive Tanya Ward.

Gráinia Long of the ISPCC said no one should confuse data protection and the need to ensure children’s safety online with imposing “unworkable” restrictions on children’s use of services.