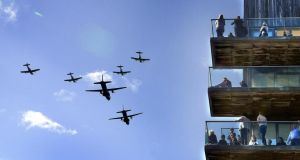 An Irish Air Corps formation flying past an apartment block on Clarion Quay in Dublin during FlightFest. Photograph: Brenda Fitzsimons

Nóirín Scully, aged 78 and three-quarters according to her family, left FlightFest a happy woman. One of Ireland’s most senior and, clearly, well-informed aviation nuts had been given the VIP treatment for the air spectacular along the Liffey – arguably Dublin’s biggest outdoor bash of the year.

Although not in the best of health, she watched the three- hour air display from the comfort of the fifth-floor vantage point at the Convention Centre Dublin, where she didn’t miss a thing.

“You only have to bring me to visit airplanes and I’m very happy,” she said.

“I thought it was really good, I enjoyed it, loved it – maybe at times there was a bit of a gap between certain aircraft, but these things are very hard to organise,” she added, showing an insider’s sympathy.

She loved the giant double- decker Airbus A380, the headline act for the marathon fly- past, which she said was “very, very impressive”.

There was a little disappointment that the RAF Vulcan, a huge delta-winged bomber, could not cross the Irish Sea due to a technical problem, but another war bird, the Flying Fortress, more than made up for that, she said.

100,000-plus
Nóirín was among the estimated 100,000-plus people who packed Dublin’s quays from the Custom House to the Pigeon House chimneys (organisers put the figure at 130,000).

The crowd shuffled into place as if queueing for Croke Park; all that was missing was a man shouting “hats, flags and headbands”.

Meanwhile, the public address system blasted out all manner of gob-smacking facts. Did you know, for instance, that a Boeing 757 converted for freight use could transport six million golf balls? Or that its combined flying miles are equivalent to 25,000 trips to the Moon (or something like that)?

Aer Lingus and Ryanair made the most of the event with multiple fly-pasts, whereas the other civilian operators made do with more modest displays.

Ryanair doesn’t do modesty, it seems, and the underside of its aircraft fuselage was adorned with the slogan “U never beat d Irish”.

“That’s probably the closest Ryanair flies to a city centre,” quipped one wag.

The huge crowd strained its collective neck as the Air Corps flew in formation – a dangerous game given the force of the stiff westerly which clearly buffeted the small aircraft.

The Irish Coastguard was supposed to fly two Sikorsky search-and-rescue helicopters – but one had to withdraw to facilitate – wait for it – a search and rescue.

FlightFest organisers no doubt left the city centre as relieved as they were pleased.